Good morning, I have my period today. 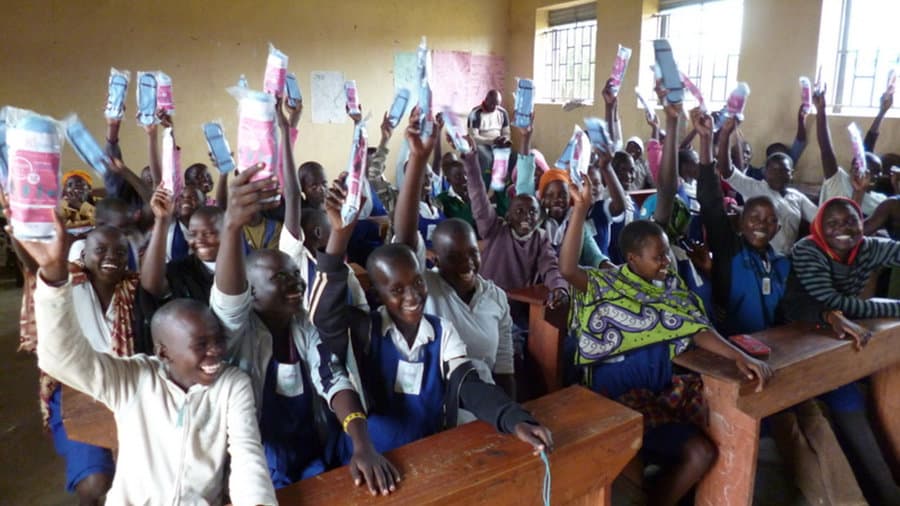 There a lot of things that will make you stop and rethink who you follow on Twitter. Ignorance, bigotry, pictures of food for no particular reason, retweets of cats wearing hats or vines of horses dancing to Kiswahili Christian music. Another thing is a soiled sanitary pad.

This very image popped up on my timeline awhile back and my first response was to exclaim ‘vile’ out loud much to the dismay of the person sitting next to me. This reaction was to a photo taken of a university campus campaign which posed the question ‘why are we not as disgusted by rape as we are by periods?’ This was a good question. With social media allowing shocking content such as photos of xenophobic attacks and even the deceased from the Garissa attacks to do the rounds, why is it that something so natural should elicit such a shocking response?

Yes, my name is Kagure and I have a period every month. Please, hold your applause, despite my monthly martyr attitude I am not the first and I shall not be the last. So why is it we seem, as a society, to either be surprised or disgusted when the idea of having a period comes up? Aunt Flo. The Red Visitor. That ‘ Time Of The Month’. Men-STRAY-shun.

Even before biblical times women have been seen as ‘unclean’ for going through a process that forms part of the cycle of life. We are more comfortable with a man randomly blowing his load than we are with the idea of a woman shedding the lining of her uterus.

Even outside the idea of bearing children (which is not the only justifiable reason to embrace the idea of having your period) there are various reasons to embrace this time. It is a monthly spring clean in which there is a whole process where oestrogen is released and this adds to strong bones. This is but one of the magical things that happen. It is a completely natural process that women trickily navigate every month, for decades; this commitment in itself is commendable.

One online post summed up the miracle of menstruation when it spoke of this being the only time when one wakes up in a pool of their own blood and your first thought is ‘I need to wash the sheets.’ We bleed for days without dying. If that is not a super power I do not know what is. The next blockbuster movie should be based on that rather than transforming into cars.

But despite this natural occurrence we have done everything to hide it from society. I have family members that call tampons bullets and when I buy tampons at Nakumatt they wrap up so tight that one would think you had just engaged in some form of illicit drug deal.

On the continent menstruation is seen as women’s issue and notions of menstrual taboos remain prevalent. From religious ideas of cleanliness to traditional ideas of ‘being cursed’ there are a great many restrictions placed on a woman during this period by cultural norms and religious taboos.

This goes far beyond ‘the fear of wearing red pants’ when girls of school going age do not attend school due to the stigma of menstruation. Without access to proper sanitary products, girls use mattresses, blankets, newspapers and even feathers, all of which would make an already uncomfortable experience nigh unbearable. This has scores of young women missing large chunks of school and even dropping out. This, coupled with extremely low levels of knowledge about this time in their physical growth cycle, has an over adverse effect on not only their future as individuals but on the future of communities, countries and the continent. All because ‘periods are icky’.

There has been some progress made; Kenya dropping the import tax on feminine hygiene products in 2011 helped reduce costs by 18 percent, but more needs to be done in terms of social taboos. There is also the work done by THINX inventors, whose period panties who have sought to change the conversation by inventing a type of underwear made up of four layers; the first is a moisture proof layer, the next a stain resistant anti-microbial layer, the next the equivalent of a pad which can ‘hold up to two to six teaspoons of blood’ and the last is leak resistant layer. They have partnered up with AFRIpads, a Ugandan NGO that makes and distributes washable, reusable pads to women who need them.

The idea of a woman being anything less than smooth, clean and perfect terrifies us to the core. Too much hair, too much sweat, too much anything is not a good look on a woman. Earlier in the year Rupi Kaur’s Instagram photo showing her period staining her track pants was deleted after Instagram claimed that it violated the company’s ‘Community Guidelines’. This photo had been part of a photo series that sought to ‘demystify the period and make something that is innate ‘normal’.

Tampon and pad adverts have taught us for years that we must be delicate and discreet during a time when all some of us want to do is thunder through the world and possibly hug a packet of party sized crisps and weep. Adverts do not even have the gall to have blood show red on a pad, instead making it a digital looking blue. This kind of censored advert is often then followed by a movie in which ten people get shot and blood covers everything. How about we have an advert where a woman slays a monster, Kill Bill style, which then gushes blood and she uses a tampon to soak it up? Now that product I would buy! That resonates with me far more than playing volleyball on the beach or being able to go roller-skating (why does buying tampons mean I must suddenly be active anyway?)

We should not be so appalled by our period. I am not saying that you must live tweet about it whilst posting no-filter selfies for a week. I am merely stating that when I mention my period in polite conversation do not look at me like I have just thrown a turd at you. I have not. I have just mentioned something that happens every month since I was 12.

This especially goes out to the women because we are all in the same boat. And as for men, in a world of increasingly equal parenting, not knowing how to buy your teenage daughter tampons or sanitary pads is something to be ashamed of. Gone are the days where we clap for you for being able to say something other than ‘lady products’.

We need to stop shying away from the idea of menstruation when we live in a world where we barely flinch at images of people who have been the victims of vicious attacks, mass mobs being incited to violence, people beaten to a pulp or sexually assaulted in increasingly bizarre and brutal ways. These are the things that should shock us, not something that has been happening every day since the beginning of time. We should not be ashamed to talk about our periods any more than we should be ashamed of talking about having a cold, growing our hair or putting on deodorant. There are far worse things to be outraged about.