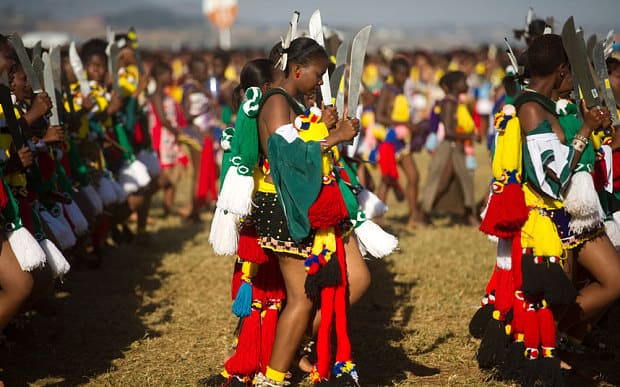 Swaziland’s Reed Dance Festival went ahead on Sunday despite calls to cancel the event following the death of 13 girls and the serious injury of 20 others in an road accident on Friday night.

The virgin girls were en route to the reed dance to perform for King Mswati III, in an annual cultural festival where the King can choose a new bride.

The death toll was initially thought to be 38 “but the toll hasn’t risen” since the accident, police spokesperson Khulekani Mamba told AFP.

Dead bodies lay on the back of a truck Saturday Aug. 29, 2015 near Swaziland’s capital Mbabane. Photo: AP

Rights groups have accused the police and monarchy of  falsifying the death rates and say the death toll has actually risen from 38 to 65.

King Mswati said the girls’ deaths were a “tragedy in the nation” and there’s an ongoing investigation into the accident.

The week-long festival in which thousands of bare-breasted young virgins dance and sing is expected to continue. The traditional festival celebrates Swazi culture, womanhood and virginity.