The Angola-Portugal connection: a relationship of mutual dependency
Advertisement 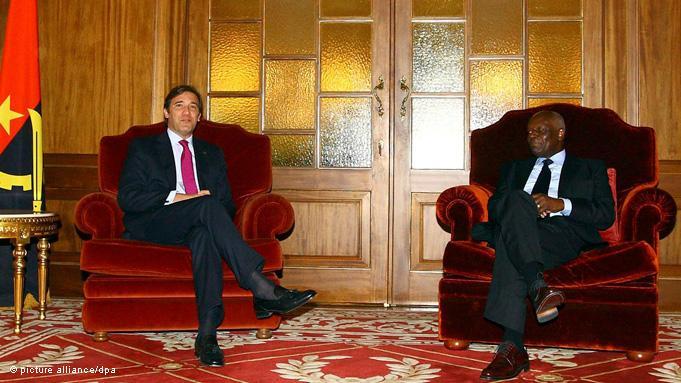 In July 2013, the president of Portugal, Aníbal Cavaco Silva, went to Angola for an official visit that lasted five days – the longest for a Portuguese serving president, according to the Portuguese press. The goals of the visit were to unblock overdue payments that the Angolan government owed to Portuguese firms operating in Angola, to make formal and informal contacts with the Portuguese community there, and, more importantly, to formalise the commercial and  diplomatic relationships between both countries in what was then called “a strategic partnership”. According to many statements made by Cavaco Silva, it was a question of strengthening the ties forged through the common history of both countries.

However, two months later, in mid-October, Angolan President José Eduardo dos Santos himself announced the end of negotiations. In his State of the Nation speech, Dos Santos named “high-level misunderstandings and the current political climate” as the main reasons for the change in Angola’s position. The news fell like a bomb. For some analysts in both Angola and Portugal, the reason for the change was not hard to fathom. A number of important figures in the Angolan political-business elite – including the vice-president, Manuel Vicente, and General Kopelipa, a senior adviser to the president – were involved in a number of legal cases in Portugal related to money laundering. Portugal sent high-level emissaries, including ministers, to revive the deal. Portugal’s then minister of justice, Rui Machete, apologised to Angola, but it was not enough. Even though the cases did not reach the courts, the Angolan side did not consider the strategic partnership again.

Angola’s economy is thriving. With the end of the civil war in 2002, financial resources have been redirected from the military into development projects. Photo: Magnus Manske

In theory, a partnership would have been mutually advantageous. On the one hand, Portugal is facing a serious economic crisis, with a related rise in unemployment. Many Portuguese have been forced to search for jobs overseas and it is estimated that about 350, 000 Portuguese citizens are living in Angola. On the other hand, Portuguese products, such as wines, that cannot compete in more demanding markets are finding niches in countries like Angola. Furthermore, Angola’s economy is thriving. With the end of the civil war in 2002, financial resources could be redirected from the military into development projects. The oil boom of the last years has also improved Angolan economic prospects. Consequently, the economy has become increasingly more complex, requiring the expertise of a well-trained labour force. In purely economic terms, a “strategic partnership” could be beneficial for both countries.

However, as the Portuguese president stated, the partnership was based on “a common history”, and this is the crux of the matter. Cavaco Silva may have been thinking of positive aspects, such as shared culture, language and blood. But for many Angolans, this encroachment of Portuguese interests is tantamount to colonialism in other terms.

Protesters take to the streets of Lisbon, Portugal to demonstrate against planned cuts of pensions and salaries. Photo: Wikimedia Commons

I do not mean neo-colonialism, or the privileged relations that have characterised some European countries and their former African colonies. The ties between Portugal and Angola are of a particular nature. Portugal never had any sort of military influence in Angola after independence (as France, for instance, has in its former colonies), nor does it influence Angolan foreign policy. The most advantageous deals in the Angolan economy, in sectors such as oil and  infrastructure, are in fact dominated by American, French, Chinese and even Brazilian multinationals. The economic relationship between Portugal and Angola is largely based in cultural, linguistic and blood ties. Portuguese interests act as a sort of middleman between Angola and the world, with the necessary language and cultural skills to help with financial and legal services, for instance.

Portuguese dictator Antonio Salazar believed that the solution was to advance the integration of the colonies and the “mother country”. Photo: Art Library Fundação Calouste Gulbenkian

In the early 1960s, the Salazar dictatorship in Portugal, confronted with the impending independence of African countries, believed that the solution was to advance the integration of the colonies and the “mother country”. The infamous indigenous code – a set of laws that reduced natives to a subhuman category, with no rights whatsoever but forced to pay a tax in the form of labour conscription – was abolished, and Portuguese citizenship was extended to everyone born in these territories. The so-called “luso-tropicalist” theories of the Brazilian-Portuguese anthropologist Gilberto Freyre were extended to other territories of Portuguese colonisation in order to convince the international community that the Portuguese were building multiracial societies in Africa. Settlers did not cut their ties with Portugal and the relations between Portugal and the colonies were conceived in terms of mutual dependence. This myth sustained Portuguese colonialism for another decade, and it still permeates the ties between Portugal and some of its former colonies, in particular Angola.

Take, for instance, the example of the university. The colonial state only decided to create a university in Angola very late, in 1968. Up to that time, all higher education diplomas had to be earned in Portugal. The settler population benefitted most from the university in Angola, but most of them returned to Portugal in 1975.  The newly independent country nationalised the university, but very little changed. Education policies were still rooted in the idea that knowledge is produced abroad. Either consultants had to be imported or a substantial part of the Angolan labour force needed to be trained abroad, in countries such as the Soviet Union, Cuba, Russia, China, Brazil and, more recently, in the United States and England. For both strategies, the reliance on Portugal is still paramount. Firstly, this is because of the common Portuguese language. Secondly, there is a relation of “proximity”. For instance, it is probable that most Angolan lawyers  have  been trained at a Portuguese university. A number of Angolan laws have been adopted, sometimes verbatim, from the Portuguese ones: the current penal code is still the colonial one of 1886. Even more importantly, the passage of Angolan students through Portuguese institutions promotes the networks that continue the  deep influence of Portugal in Angolan law-making. Consequently, when Angolan institutions need law experts, they bring them from Portugal. The recently approved Angolan constitution was vetted by a number of Portuguese constitutionalists, including José Gomes Canotilho and Marcelo Rebelo de Sousa.

An American doctor checks his patients’ charts in a rural Angolan hospital. According to stats, there is less than one doctor for every 10,000 people in Angola. Photo: Marijn Goud

Healthcare is another domain of dependency. The fragility of the Angolan healthcare system is well known. According to statistics, the country has less than one doctor for every 10, 000 people. The Angolan government has worked to improve the conditions in which Angolan universities train doctors, but it has also outsourced medical care.  The  Junta  Médica   (Medical  Board), which was created right after independence, allows the government to support Angolan patients abroad. These patients are sent to many countries, such as England and South Africa – and more recently to Namibia, where Angolans can travel without visas. But Portugal is again the first choice, for medical and other practical and bureaucratic reasons. An increasing number of Angolans no longer need visas to enter Portugal and this free flow of people is key to understanding the fabric of the ties between these two countries.

This points, perhaps, to an understanding of post-colonialism that goes beyond the political and economic realms. It is a matter of culture, language and blood. Today, a significant part of the population can claim to belong in both places. Key to this is the question of citizenship. Portugal changed its citizenship law in 1974, soon after the Carnation Revolution. This was to prevent Africans born in Portuguese colonies – who, by law, were then Portuguese – from  claiming citizenship. In this way, many Angolans who were transferring their  retirement savings  to the Portuguese treasury were stripped of their citizenship. Angola did the same: settlers were deprived of their Angolan citizenship unless they formally stated their will to continue being Angolans. Portugal privileged jus sanguinis (citizenship as a birthright for those with a Portuguese parent), which opened the door of citizenship for those Angolans whose ancestors were Portuguese. For the Portuguese, it was more difficult to claim Angolan citizenship. However, Angolan law would change in the late 1990s, so that it now privileges jus soli (citizenship as a birthright for those born in the territory). Blood ties continued to be important for the attribution of Angolan citizenship, but land was also made an important factor. The outcome was that settlers who had been born in colonial Angola could not only claim Angolan citizenship, but could also pass it on to their children.

We can now understand the intermediary role of Portugal in Angola’s economic relations with the rest of the world. An increasing population of Luso-Angolans – people with  blood ties in both countries – creates this constant flow of people, knowledge and money. This has been important for firms in the legal, communications and banking sectors. For instance, a number of Portuguese firms have been able to cut their logistical expenses by keeping part of their operations in Portugal, with only a residual presence in Luanda.

In  conclusion, Portugal needs Angola as a destination for immigration in times of crisis. Angola is, for instance, the third largest source of remittances from  Portuguese emigrants (after France and  Switzerland). Conversely, Angola needs Portugal, both to supply a qualified labour force, and because of the  ways that its internationalised  economy and  finances pass  through Portugal. Angolans and Portuguese are now tied to a regime of mutual dependency. The clout that Angolans have on the Portuguese judiciary system is just one example of these entanglements.

Right now, it is difficult to predict the future of political and diplomatic ties between Angola and Portugal. However, the mutual dependency goes beyond these formal ties. To a great  extent, blood and culture will continue to underpin their relationship.

This article is published here courtesy of the Heinrich Böll Foundation.