Can the African child dare to re-invent the future?
Advertisement 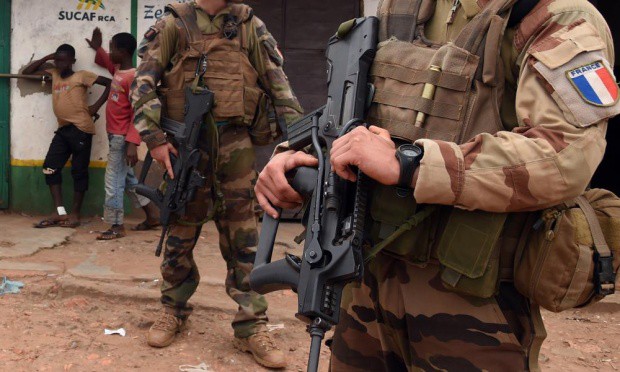 A United Nations (UN) report on this heinous crime “details the rape and sodomy of starving and homeless young boys by French peacekeeping troops who were supposed to be protecting them at a centre for internally displaced people in Bangui,” the CAR capital.

For many people on the African continent, this behaviour is synonymous with their own leaders, warlords and militias, not peacekeepers. Those are the stories we hear. Indeed, the reaction of the UN itself suggests this grave matter was downplayed — almost silenced. The whistleblower who brought the internal report to light via prosecutors, Andreas Kompass, was suspended and an attempt to discredit him was launched.

In an interview with British newspaper The Guardian, Paula Donovan of Aids Free World, spoke of the UN’s response to the revelations:

“The regular sex abuse by peacekeeping personnel uncovered here and the United Nations’ appalling disregard for victims are stomach-turning, but the awful truth is that this isn’t uncommon. The UN’s instinctive response to sexual violence in its ranks – ignore, deny, cover up, dissemble – must be subjected to a truly independent commission of inquiry with total access, top to bottom, and full subpoena power.”

However, it is the tale of those who are close to the child victims that is most disturbing. The following from an Associated Press (AP) report, in substantial detail:

The mother of one of the children told AP that her son was just 9 years old when he was assaulted by French soldiers. She spoke on condition of anonymity so as not to identify her son as a victim of sexual abuse. Her family had fled to the airport the first day of the sectarian clashes in December 2013, and she and her son are still living there.

“The children were vulnerable because they were hungry and their parents had nothing to give them, so the children were forced to ask the soldiers for food,” she recalled.

“They took advantage of the children, forcing them to perform oral sex and also sodomizing them,” she said. “The moaning of children in the area often started around 10p.m. or 11p.m.”

Another resident said other abused children ranged in age from ten years old to thirteen.

“In exchange for cookies, the soldiers demanded oral sex,” she said, recounting what the children told her. “Afterward they were given bottles of water. They even sodomized the children.”

Outrage from African child rights activists and other human rights defenders has been muted. It could be the fact that the story of an African child getting raped is now embedded in our conscience so much that it is anticipated. But even when French troops are the instigators and the UN is complicit in an attempted cover-up of the gross human rights violation?

What of the children themselves? What support are they getting? Are there any psycho-social support services they are accessing? Are they ever going to be able to overcome the horror of the indignity they suffered, in confronting a war first and then being further brutalised by those mandated with protecting them? What hope is there? What dreams and aspirations can be formed under such circumstances?

“Day to day Africa. Oh, not the Africa of the poets, the Africa that is sleeping, but the Africa that stops you sleeping because the people are impatient to be doing something, to speak and to play. The people who are saying: ‘We want to make ourselves a people, we want to build, love, respect and create.’ The people who weep when you say ‘I come from a country where the women have no children and the children have no mothers.’”

It is hard enough for any African child growing on the continent, surrounded by so much pain, anguish, despair and hopelessness. It is the agonising result of countries which have won the battle for independence but are still far from winning the war on the indignity that is the daily living of most Africans. You can hear the poet, Dambudzo Marechera mourn:

Who yesterday a country won

If our African independence was about breaking new ground and opening up new vistas of thought and imagination for a better and brighter future, then it speaks directly to the kind of inheritance passing from generation to generation since independence.

The summary, to be sure, is less than flattering – corruption, greed, dictatorship, war and poverty. Children, the so-called leaders of tomorrow, are denied agency and are silenced, pushed to the margins where they are told that their moment will someday arrive, but not today.

No greater lie has ever been told on this continent.

There are numerous initiatives on the continent which are promoting child rights and affording children platforms to express themselves. These have to be commended. Against the backdrop of the African Union’s so-called Agenda 2063, however, the distance and time it will take to have a radically progressive turn of events on the continent becomes quite apparent – an almost impossibility.

While many people will claim that Agenda 2063 is about incremental gains, conveniently forgetting the Millenium Development Goals (MDGs) whose shocking failure has been unashamedly redrafted into something vaguely called the Post-2015 Agenda, the burden placed upon the African child continues to grow heavier everyday. Nowhere is this more evident than in the remarkable failure by most African governments to close the inequality gap in their countries.

Hence, if there ever was an opportune time to move beyond romanticising the massive growth of a young African population in a continent that is supposedly rising, then the occasion of the Day of the African Child, 16 June 2015, is that moment. In doing so, we must ask if that Child is equipped with the necessary tools to re-invent the future.

This day was inaugurated by the Organisation for African Unity (now African Union) in 1991 as a way of honouring the young students of Soweto who protested against the apartheid regime choice to use only English and Afrikaans as languages of instruction in schools, which was, more critically, a way of instating white supremacy over black existence.

“The logic behind white domination is to prepare the black man for the subservient role in this country… To a large extent, the evil-doers have succeeded in producing at the output end of their machine a kind of black man who is a man only in form. This is the extent to which the process of dehumanization has advanced.”

Although not fully conscious of the fact, this is essentially what the young Soweto students were protesting against on that day – they were on a mission to regain their humanity, reclaim their dignity and re-invent their future in so doing. For this reason, there is something tragic, if not morally repulsive, about the reduction of this courageous and revolutionary act into a romanticized event, spoken about frequently but the meaning behind which, the potency and conviction of which, internalized by very few.

Re-inventing the future, ultimately, is risky business and there are great pains to be suffered; there is nothing romantic about it except the deep love and devotion one possesses for their country and cause. Ask Mbuya Nehanda. Ask Amilcar Cabral. Ask Patrice Lumumba. Ask Thomas Sankara.

In fact, it was Sankara who, when asked about the radical change he brought to Burkina Faso under revolutionary conditions said:

“You cannot carry out fundamental change without a certain amount of madness. In this case, it comes from non-conformity, the courage to turn your back on old formulas, the courage to invent the future. Besides, it took the madmen of yesterday for us to be able to act with extreme clarity today. I want to be one of those madmen.”

Conformism and compliance, sadly, stand in the way of young people today. Perhaps this is why there has been very little outrage towards the French soldiers who raped the children in CAR, and the subsequent attempt by the United Nations to cover up this evil act. To speak up against this evil might result in punishment in the form of lost “opportunities,” courtesy of France and the UN.

It will be impossible, however, to reinvent the future of Africa without standing in solidarity with its children, who, like Soweto’s children in 1976, are the carriers of our hopes, dreams and aspirations. To conveniently forget the CAR children, for example, is to neglect, if not endorse, the assault the African child faces on this continent on a daily basis.

So, to reinvent the future?

“Yes,” as Thomas Sankara would undoubtedly say, “we must dare to invent the future. In the speech I gave launching the five-year plan, I said, ‘All that comes from a man’s imagination is realizable for man.’ I am convinced of that.”