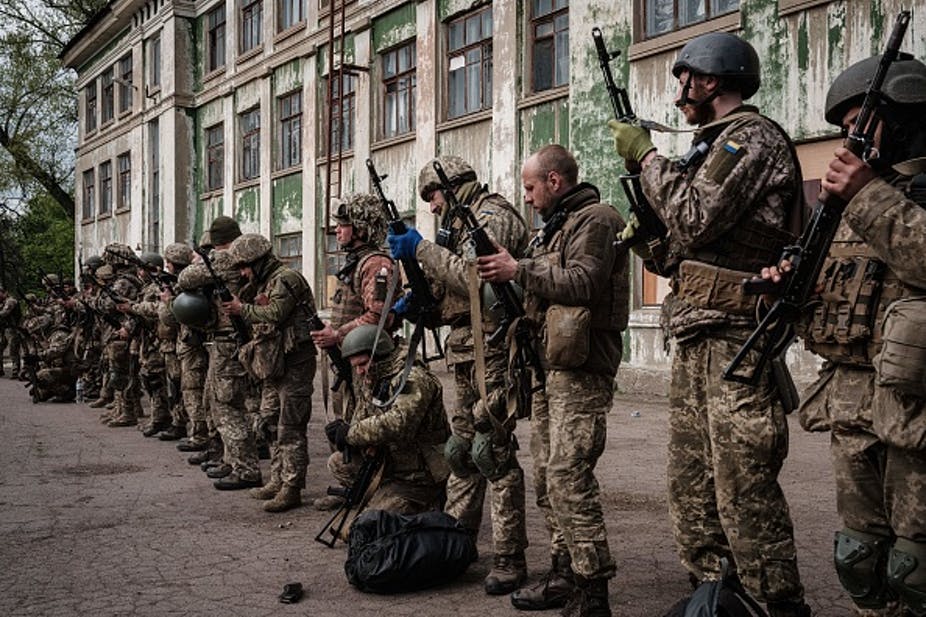 In explaining the war on Ukraine, ideology matters as much as interests. This means that we need to factor ideology into our analysis if we want to gain a deeper understanding of interstate violent conflict. If we focus purely on the material interests of an aggressive state we land up with a lopsided picture of war. We view it simply as a continuation of politics – diplomacy has failed therefore the use of force is the only option.

But understanding and forecasting foreign policy behaviour requires understanding ideology and interests – equally. Ideology is important for a number of reasons. It highlights political actors’ consideration of what is right or wrong and how they see themselves. It also tells us who they associate with as well as their interpretation of the world.

Russia’s invasion of Ukraine was a rude awakening to the liberal world, raising the fear that liberalism’s ideological hegemony may have ended. This, after 30 years since the “The End of History?” as, advanced by political scientist Francis Fukuyama.

Are we seeing an antithesis, the beginning of history, along opposing ideological fault lines?

Weeks before the Russian invasion, liberal democracies such as the EU, Ukraine, the US, stood in opposition to Russia, Belarus, and the breakaway regions of Donetsk and Luhansk. What is not clear is the ideology of the side opposing the liberal democratic grouping, other than to say that they are illiberal or autocratic.

Opposing ideologies were also evident in the United Nations Security Council. Kenya expressed grave concern over Russia’s recognition of Donetsk and Luhansk as independent states and argued for the pursuit of peace through diplomatic channels. This placed it in the liberal democracy camp.

The pursuit of liberal peace stood opposed to the tacit support of despotism.

My research on conflict and cooperation over water resources and as a lecturer in international politics teaching foreign policy analysis shows that ideologies and interests are important in understanding and forecasting foreign policy behaviour.

Ideologies are about our identities, moralities, how we perceive cause and bring about change, and the interpretation of events and procedures. Through ideologies, political actors consider what is right or wrong, how they see themselves and with whom they associate. This goes along with their interpretation of the world.

Ideology resides within our cognitive and political lived experiences.

Ideology’s interpretation element comes to the fore when one considers that ideologies often claim that they have an opposite ideology to denounce, overpower and defeat. These opposite ideologies often take a dehumanised form of an alien power. In Ukraine’s case, it is perceived Nazism. The remedy is the denazification of the Ukrainian state and leadership.

Russian President Vladimir Putin and his government have been referring to this phenomenon in Ukraine before and during Russia’s invasion of Crimea in 2014. This interpretation of Ukraine by Russia and its leaders is ideological propaganda.

Cause and effect play out in the ideological equation when the Russian leadership sees fit to react in such a way as to bring the Russians and Ukrainians together into one state since the powers in the Kremlin disbelieve that a separation between the two peoples is not the preference of the Ukrainians.

Ukraine’s leadership and citizens resistance to the invasion indicates a general aversion to conquest and despotism. It also shows an ideological stance leaning heavily towards liberal democracy. This manifests particularly in the Ukrainian government’s calls to join the EU and NATO. It’s also been clear from the virtual addresses by President Volodymyr Zelensky to the US Congress, the Parliaments of Canada, EU, Japan and a host of other liberal democracies.

Considering interests, power, security, and wealth in the invasion have seen its fair share of explanations. Putin’s view of the North Atlantic Treaty Organisation’s (NATO) encroachment ever closer to Russia’s border over the past 30 years is often proclaimed as the main explanation for his decision to invade. Fearing an alliance that had been in the past the natural foe of the Soviet Union does not sit well with Russia and its leader. Within this interpretation, we see power and security manifesting at the state and individual levels.

The geopolitical proximity of the Nato makes it difficult for Russia to keep its neighbours in its near abroad under its Soviet Union-style sphere of influence. The projection of Russia’s power is interlinked with its security concerns. Both are on the same side of the foreign policy coin.

With the prospect of Ukraine becoming a NATO member, Russia and its leader find it difficult to intervene and support unpopular regimes among NATO’s members. Belarus is a case in point.

Regarding the wealth aspect, Ukraine has for long been the breadbasket of Europe and many developing countries. Ukraine is also home to some of Europe’s largest nuclear and hydroelectric power plants.

Before the invasion, there were plans to restructure the Ukrainian energy system and integrate it into a common energy area. Germany and the US are leading players. In July 2021, they declared that Ukraine’s connection to the European energy market is high on Germany’s and the EU’s political agendas.

Natural gas is, therefore, not the only explanation for Russia’s powerful grip over Europe.

Is the world standing again at the beginning of history after the Second World War when two emerging ideologies stood opposite each other? On this, and to paraphrase Vladimir Lenin’s famous quote:

In the end, one or the other will triumph – a funeral dirge will be sung over the Russian Federation or liberal democracy.

Slim chance that Zimbabwe’s 2023 elections will be competitive

Democracy in reverse? The high cost of elections in Africa