When Rhodes and Mugabe fell
Advertisement 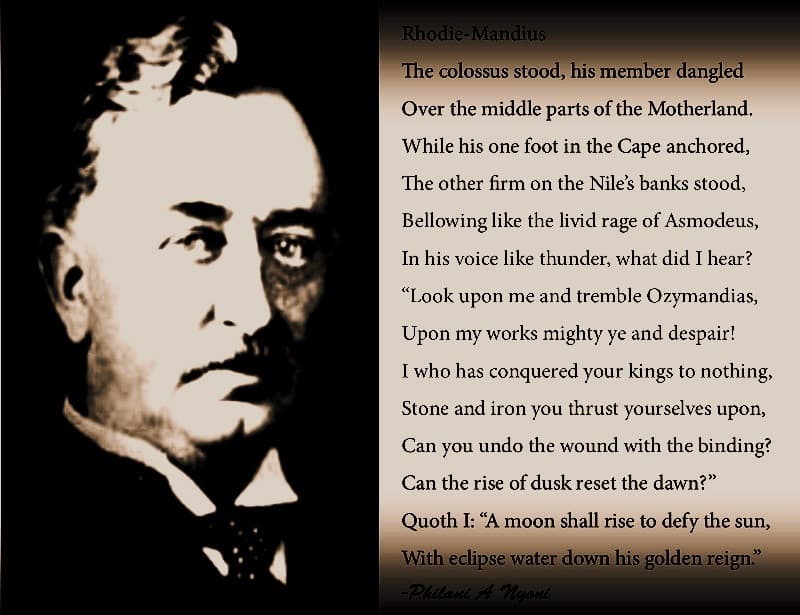 What can I say about the subjects of these works of art? Cecil John Rhodes and Robert Gabriel Mugabe. They are much alike; two men with astonishing visions, ruthless to those that stood in their paths. I will mention that Robert Mugabe was in South Africa on his first state visit in over 21 years when Rhodes fell in Cape Town. Across the border at home, depictions of Mugabe in a not so favourable light finally came off the wall, so to speak.

It’s important to begin the story right. In 2010, Owen Maseko lanced a festered silence with his exhibition, Sibathontisele, about the Gukurahundi massacre. Sibathontisele, in Ndebele means ‘drip it on them’.  In the 1980s, when the country’s soils were still soggy with the blood of its liberation, Mugabe unleashed the Fifth Brigade – a fierce North Korean trained regiment – onto the Matabele region. Apart from killing an estimated 20 000 people, they dripped liquid plastic onto their living flesh. Mugabe would later call this period ‘a moment of madness’ and it has since been erased from our history books.

Sibathontisele was shut down within 24 hours and Maseko was jailed and arraigned before the courts for “undermining the authority of the president.” Strangely, the president’s goons who are known for their brutality didn’t even hurt a lock of his hair. From the belly of the beast Maseko escaped unscathed when the courts acquitted him, but the works would remain shackled, grow cobwebs vaulted in the National Art Gallery for half a decade. Was there ever a starker symbol of suppression of expression?

On that day, five years after the exhibition opened, I watched Owen Maseko walk into the gallery, the same gallery Robert Mugabe had officially opened. The same gallery on Joshua Nkomo Street, formerly Main Street, renamed in 2013 after the man affectionately known as Father Zimbabwe.

The cigarette smoke melted into the mist on that cold morning when I realised, on my way to work that something had changed. Someone had taken the time to dress up all the ‘Main Street’ signs with makeshift Joshua Nkomo Street names. When the work of Maseko finally went home two years later, a life-size Nkomo stood on a pedestal looking North, with the gallery in his view. On that day I would forgive the simulacrum a smile.

The effigy had another reason to smile. Right where it stands, once stood another statue of Cecil John Rhodes in what was then Rhodesia. Now that statue sits just outside the Natural History Museum in Bulawayo, forgotten and gathering dust.

For five years Maseko had been barred from his own work and his work barred from us like a crime scene, and men with cameras were afraid to take pictures like this one in the marketplace.

Can one say the liberation of Maseko is the liberation of art? Even in the courtroom a precedent has been set. Though the shackles of fear have not been broken in our spirits, the journey of a thousand miles begins with a step. Like the beloved Sam Cooke sings: “yes, it’s been a long time coming, but I know a change is gonna come, oh yes it will!”

Art, if it is good, is timeless.  Those of us who purport to be the benefactors of the divine blessing of a God who whispers through a muse often ask, how will our legacies survive? For some of us our legacies will survive in wretched pictures depicting a gruesome ‘moment of madness’ that speak to the silences of nationalist histories? In those pictures hidden away for half a decade, the children of the future will see a courageous artist not in the service of those who make history but in the service of those who suffer it, to paraphrase Albert Camus. Perhaps that is our only duty.

South Africa: We should be burning vitriol not people

Somaliland and the trouble with free press