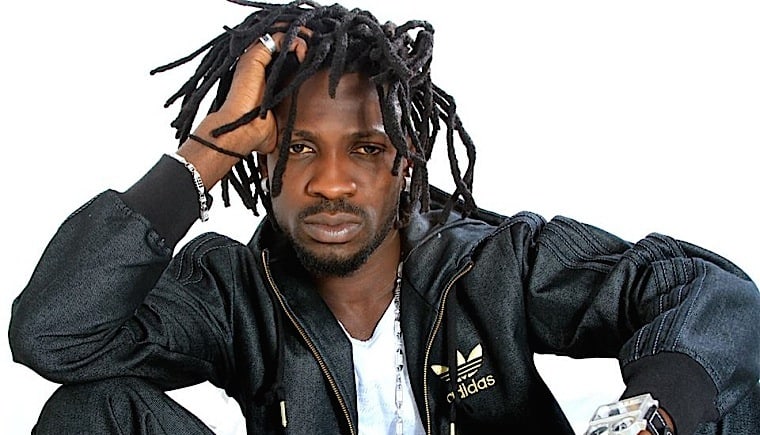 The denial of a UK visa to Bobi Wine (real names Robert Kyagulanyi) means that he will miss two scheduled gigs in Birmingham and London. In one of various online petitions against Bobi’s visit, the petitioners write:

“Ugandan artist Bobi Wine writes songs with blatant homophobic lyrics and calls for gay people to be attacked, or killed.

Allowing such an artist to appear in public is clearly going to raise tensions and we’d respectfully request that his appearance within the UK is cancelled immediately.

In Uganda LGBT rights have been taken away with the introduction of the Uganda Anti-Homosexuality Act, 2014. The UK prides itself on tolerance and understanding but allowing someone to perform hate songs which incite violence is unacceptable.”

“My right of expression”
Although the Anti-Homosexuality Act, 2014 was nullified last month by the Ugandan Constitutional Court, the decision to deny Bobi Wine a visa to the UK had already been made by the British High Commission in Uganda. But before the visa denial, Bobi had taken to The Daily Monitor, a local newspaper, to defend his opinions about gay people.

“There has been so much talk about me in the media all over the world, threats and all because of my opinion about the gays. Before anyone accuses me, it’s important to understand where I’m coming from (….)

I am personally not out to threaten the life of any individual based on their sexual Orientation, I just DO NOT agree with them. This is my opinion and happens to be that of 99 per cent Ugandans/Africans basing on our culture, religion and Constitution. (…)

Homosexuality may be a phenomenon that has lived in the nooks of society and as humanity requires, I sympathise with the victim, in the confines of the word victim and most definitely sympathy should not be misinterpreted as endorsement. How be it, I completely fail to understand the pride and why the gays are so happy about it. If my opinion makes me third world, then I am happy to be.

(…) as far as this is concerned, I hope that the proponents of homosexuality who pride themselves in their liberalism and support for human rights, will allow me my right of expression much as they may not be comfortable with my opinion.”

Is there more to this than meets the eye?
Bobi Wine’s opinions about gay people have perhaps become part of his brand as an artist. He previously criticised President Barack Obama’s stand on gay rights in a Facebook post that he later pulled down. The post had however attracted the ire of renowned Ugandan gay rights blogger Seba, who then wrote:

“Mr. Kyagulanyi dear (…) You need to keep the fans who have gamely stood by you (…) some of your fans are gay, or they have friends who are gay. While you are entitled to think ill of gay people, it is daft to say it publicly as it can only erode your (…) appeal. (…) Focus on widening your fan base, not narrowing it with (…) advice to Barack Obama.”

Bobi’s opinions about gay people have until this point not been central to his lyrics, as he has made his name largely singing socially-conscious songs. Raised in the slums of Kamwokya in Kampala, he prides himself as the voice of the ghetto. Thus in a song titled Ghetto, he took on the authorities and warned that he would continue singing songs of this nature if nothing was done by the government about the grievances of the people. The song was banned from the airwaves, but by then he had won more fans who care about the conditions of life in the country, especially the underprivileged.

When he sang against new city executive director Jennifer Musisi’s policies, aimed at restricting access to residential and economic activity in Kampala to the middle and upper-classes, Bobi again won himself more loyalty from socially-conscious fans. Tugambile Ku Jennifer, the song was also banned from the radio airwaves. But the authorities this time decided to dangle a carrot at the singer. He was allegedly paid over forty million Ugandan shillings (about $15,000 USD) to participate in a government-organised city carnival. Analysts noted that this was a subtle bribe to the artist. Some of his socially-conscious fans were disappointed. In a city that is becoming increasingly harsh for poor people, the silencing of such voices is a big blow for the social justice movement.

It is true that the larger percentage of the Ugandan population is not comfortable with an openly gay community, thus critics of Bobi Wine who accuse him of populism may have a point when they say that he was targeting a sexual minority to raise his ratings, especially in the aftermath of the city carnival performance. But the extent to which he aims to do this is not readily ascertainable, considering the song with the lyrics in question has not yet been released. Dan Atuhaire, a music analyst, says the only time the lyrics have been in the public was a filmed session of the production of the song.

He says the only other lyrics close to inciting hatred against gay people are in another song, titled By Far, understood as targeting Bebe Cool (real name Moses Ssali), a rival musician who is open about his support for gay rights. The lyrics in question are: “Badman, tayambala bu jean bwaba dame (…) Badman, tazalawa bya buwangwa bye.” In the song he talks about how he is better than his rival, and in the quoted lines above, says he does not wear women’s jeans neither does he criticise/betray his own culture. Although the undertone of the lyrics is that it is wrong to wear female jeans and to ‘betray’ culture, the song could be absolved of charges of inciting violence, as its core aim is to diss another artist.

Bobi Wine has built an image as a champion of the causes of the lower classes. He has ridden on this image to gain commercial success, attracting endorsements from brands interested in targeting this specific market and also attracting patronage from Governmental and Non Governmental Organisations whose missions range from fighting drug-abuse to environmental protection. It remains to be seen if the inclusion of an anti-gay agenda in his music will dent or reinforce an image he has built over the last two decades.

Update (18th August): Bobi vs YouTube
According to Uganda’s Daily Monitor newspaper, Bobi Wine uploaded to YouTube the anti-gay song that led to his being denied a UK travel visa (and, consequently, the cancellation of his shows in London and Birmingham), and YouTube removed it almost immediately, but not before it had received over 10,000 hits. No mentioned was made of where most of the views originated from.

“The Africa they never show you”