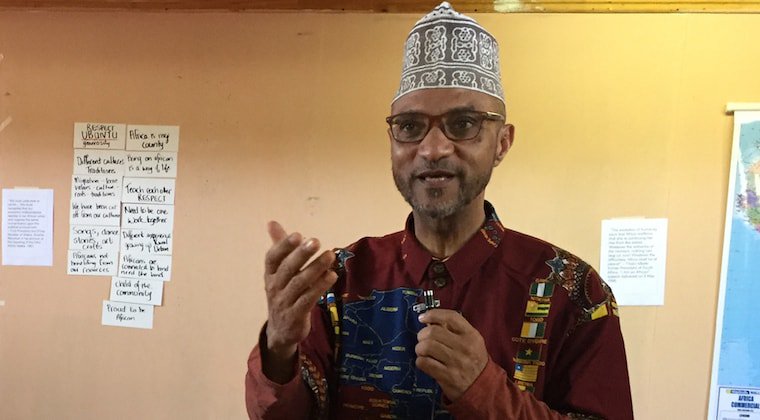 The event, at the Dunoon Naqshbandi Muhammadi mosque on 25 May, was attended by leaders of street committees and of the South African National Civic Organisation (SANCO) (Dunoon is a small township situated in Milnerton, Cape Town, South Africa).

Each community leader received 30 gift coupons to give to the 30 most vulnerable families in their street, one coupon for food, one for a blanket and the other for children’s gifts.

These will be handed out next week as Ramadan concludes with the celebration of Eid.

Claremont Main Road Mosque Imam Rashied Omar said his mosque, in collaboration with the Dunoon mosque and the Institute for the Healing of Memories, had started distributing food parcels to the community at the end of Ramadan in 2012, but had later decided before giving out food parcels to host workshops on topics including immigrants’ rights, land and race.

Siyahlala informal settlement street committee leader, Thoko Mxotwa, 48, a mother of three children, said Saturday’s workshop had helped her understand African history. “We are all human beings. We are all black and we suffer the same, bleed the same blood,” said Mxotwa.

New Rest informal settlement street committee leader Elizabeth Arendse said she had a son with an Angolan man who is now deceased and her daughter had a daughter with a Tanzanian man. “When the community says African immigrants are not South Africans, who are South Africans?” she asked

“My son and my granddaughter are very much South African and part of this community.”

Dunoon SANCO leader Messie Mpukane said when xenophobia erupted perpetrators did not think of Africa as one continent because of lack of knowledge about Africa. “We need to respect all African nationalities … By doing so we will learn about Africa.”

A woman was taking selfies on a Sea Point bench. She was arrested and locked in a cell overnight

What is it that we celebrate on Africa Day?