Two years after the handshake between President Uhuru and his biggest nemesis Raila Odinga, on March 9, 2018, I’d a running debate with a professional colleague from the Kalenjin community. “We must tell each other the truth,” he ventured to admonish me. “BBI is structured in a such a way that it will perpetuate the Kikuyu hegemony and de-legitimise a Kalenjin take over.”

His thesis was simple: A (sane) Kikuyu cannot elect William Ruto for president. All this talk about Kikuyus finding solace in Ruto’s candidature, come 2022, was a ruse. They maybe disenchanted with the son of Jomo, but that doesn’t mean they’ll vote for the Sugoi son.

This was in May, 2020, in the thick of the Coronavirus pandemic and my argument was that I didn’t see much future in the BBI. On March 31, 2022, the Supreme Court of Kenya (SCOK) declared the initiative unconstitutional and therefore dead on arrival.

The Kalenjin community may seem effusive about the “surprise” Kikuyu support for their son, “but we the Kalenjin people are not fooled easily, we’ll count the Kikuyu vote on the morning after of the election day,” said my friend. “Don’t forget a Kikuyu is always a Kikuyu, they cannot run away from themselves, they vote solely for their interests, they may pretend on their (newly found love for Ruto), but we Kalenjin are aware of their cunningness.”

118 days to the general election, the million-dollar question is: Who will the Gikuyu Embu Meru Association (GEMA) vote for in the August 9 polls? Socialised to always vote for one of their own, the question becomes all the more poignant, if all factors are held constant and cognisant of its past voting pattern and electoral behaviour. Hence, the Kalenjin have every reason to be wary of the ostensible GEMA support.

The GEMA vote is the most coveted. And although, not as many as expected new voters were registered by the Independent Electoral and Boundaries Commission (IEBC) even after the January 2022 extension (out of the expected six million new voters, only 2.5 million were registered), the GEMA vote still counts as the largest of all the total registered national votes at 35 per cent.

Since the advent of the multiparty politics in 1991, the GEMA electorate has always strictly voted for one of its own. Presented with more than one candidate, they have gravitated around the one with the most promising chance, even as they play host to sectarianism.

So, in 1992, with the resumption of a plural general election, which pitted the incumbent Daniel arap Moi and fledgling opposition candidates Ken Matiba of Ford Asili, which split from the original Forum for the Restoration of Democracy (FORD) party, Jaramogi Oginga Odinga of Ford-Kenya and Mwai Kibaki of the Democratic Party (DP), the GEMA voter was in a bind. Between the non-compromising and brave Matiba, who had been detained by Moi for a year and the pro-establishment, conservative and “coward” Kibaki, who would they vote for?

Until on the eve of December 29, the electoral pendulum, insofar as the GEMA vote was concerned, swung in Kibaki’s favour. The swing region for GEMA was Kiambu District. The district which had produced the first republic president, Jomo Kenyatta was feared for its Kiambu Mafioso, which had fought tooth and nail to ensure Moi, who had served Jomo for a dozen years as vice president didn’t succeed him in 1978.

But when the Kiambu voter woke up on the morning of the voting day, they unanimously voted for Matiba, who hails from Murang’a and dumped Kibaki, the “coward” of the Nyeri County. Apparently, a silent wave had swept through the district in the dead of the night.

Geographically, Murang’a County borders Kiambu and it’s not viewed suspiciously by the Kiambu Mafia, as opposed to Nyeri Kikuyus, who are famously known for forming the largest group of Mau Mau fighters alongside the Merus. Kikuyus from Kiambu County are generally held in disdain by the Nyeri Kikuyus and Merus for sucking up to the British as collaborators and home guards. But that is a subject for another day.

It is an interesting twist of fate that Kibaki who hails from Nyeri was seen as a coward, although he comes from a region that produced fearless Mau Mau fighters, while Matiba from Murang’a was celebrated for standing up to Moi’s excesses.

Matiba who polled second was already a spent force by 1997. He didn’t run and in fact, he commanded his supporters to boycott the elections. Therefore, there was one GEMA candidate, Mwai Kibaki. But a new party had been acceptably sweeping through GEMA land – the opposition Social Democratic Party (SDP) and its presidential candidate Charity Ngilu. Was GEMA going to vote for the “coward” Kibaki or break ranks with its voting pattern and vote for a different, fresh face, which happened to be a woman?

The December 1997 presidential elections were won yet again by Moi and obviously, all the GEMA votes went into Kibaki’s basket. It had cunningly led Ngilu to believe that it would vote for her and in her campaign tours in Mt Kenya region, she had been received as a heroine. GEMA told her Kibaki was a coward, he had refused to stand up to Moi, hence, they had no time for a Tommy.

So, really, what happened? GEMA justified it voting for Kibaki by saying; kigwoya kia inukiire nyina. Literally, it means, the coward after all, retreats back to his mother. Figuratively, it means Kibaki is a coward, but he’s still ours.

Since 1997, the Kamba people have never forgotten nor forgiven GEMA for its skulduggery. Years back, when GEMA was formed in the early 1970s by the Kiambu political barons, the Akamba people sometimes would be led to believe the letter A stood for Akamba. Geographically, the Kamba people border central Kenya on the south and are a Bantu people like GEMA. “Kikuyus are a very deceitful lot,” a lawyer from the Kamba community once told me. “You can never trust them.”

In the 2002 December polls, GEMA once again voted overwhelmingly for Kibaki, their coward. Constitutionally, Moi’s two terms had come to end, he was barred from running, but that did not bar him from coming up with a project: Project Uhuru Muigai Kenyatta. Once again, GEMA was confronted with two formidable candidates – Kibaki from the opposition and Uhuru, a pro-establishment state project.

Among the GEMA voter, it became a Kiambu vs Nyeri contest. Who would triumph? The Kiambu Mafia, had in 1969, alongside swearing that the presidential leadership would not go to the Luo land, had also decreed that it wouldn’t cross River Chania. The river separates the county from Embu, Meru, Murang’a and Nyeri counties.

This time, leading an opposition coalition, the National Rainbow Coalition (Narc), Kibaki was elected for the first time as the president. True to its sectarianism, Kiambu had voted with its feet and stuck with Uhuru, even though every one knew he was a Moi protégé. The lure of the presidential seat coming back to Kiambu was overwhelmingly too strong to overlook for the Kiambu voter.

The election of 2007 was a repeat of 2002, only this time with dire consequences: GEMA voted for Kibaki to a man, against Raila Odinga. Uhuru Kenyatta who was in the opposition publicly declared his support for Kibaki. The post-election violence (PEV) later came to define Kibaki’s government, which was accused of rigging the election. In the aftermath of the election, many GEMA people, like the American saying, justified the rigging: “Yes, we snatched the bread from Raila’s mouth. There was no way we were going to let him rule us. Never.”

Yes, we snatched the bread from Raila’s mouth. There was no way we were going to let him rule us. Never.

In the March 2013 election, GEMA rallied for one of their own like no other time in the history of electoral politics: Uhuru Kenyatta was under the threat of being taken to the International Criminal Court (ICC) in The Hague; The Netherlands. ICC become the defining campaign theme of the presidential elections: “we cannot let our son be tried in a foreign court,” become the clarion credo of the emotional GEMA voter. 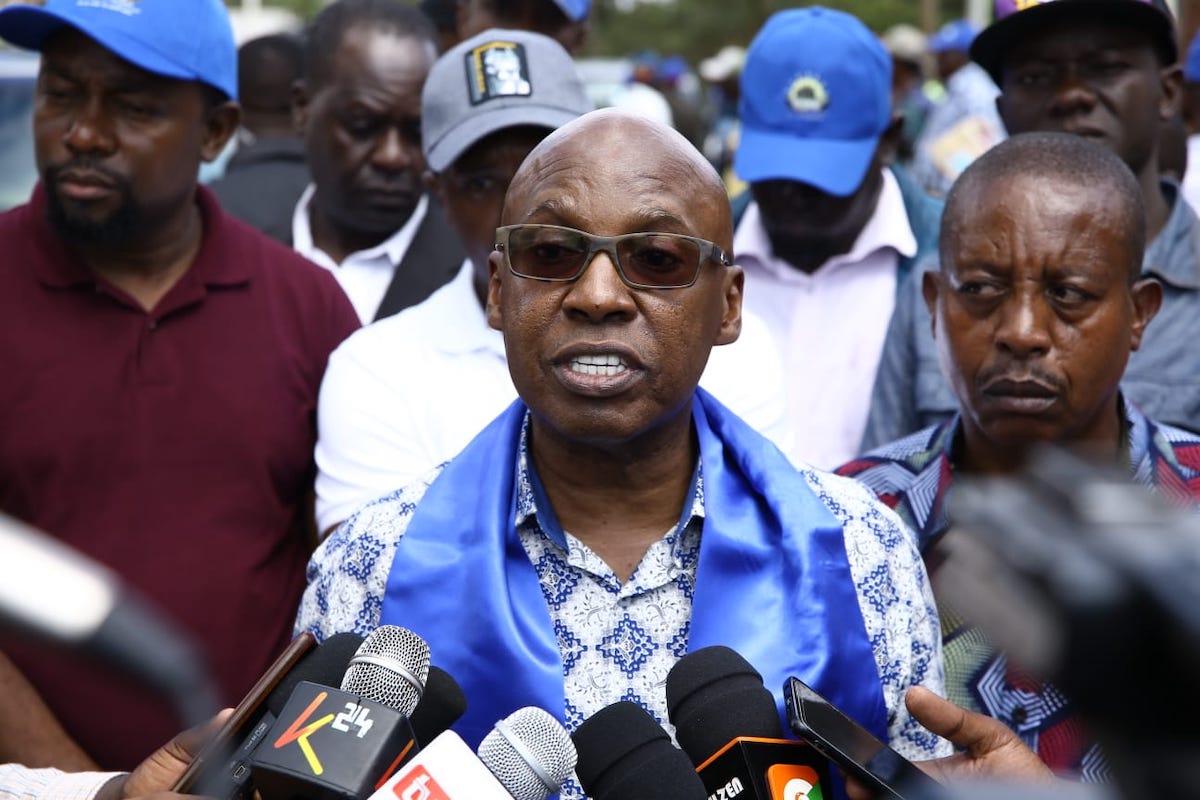 The entry of Jimi Wanjigi in the 2022 presidential race as the Safina Party candidate certainly ups the ante and banishes the notion that GEMA doesn’t have a dog in the presidential fight. A son of a former cabinet minister in Moi’s government, Maina Wanjigi, Jimi was endorsed by the national delegates’ conference (NDC) on March 21, 2022 that Ruto attended. Ruto was reciprocating Jimi’s attendance of United Democratic Alliance’s (UDA) NDC on March 15, 2021, in which Ruto was crowned the presidential candidate.

After Ruto’s NDC, Jimi and Ruto afterwards had lunch at Karen. Now according to my sources, one of the arch-subjects that quickly came into the fore in their lunch meeting was the matter of the GEMA vote. Ruto was keen to know from Jimi whether he was seriously going all the way. If so, was there a possibility of Jimi corroborating with Ruto in the hunt for the GEMA vote?

Just last week, my sources intimated to me that Ruto sent Jimi an “agreement of intent to enter into a coalition,” for his perusal. According to the sources, Jimi’s answer was a flat no. Evidently, whoever bags the Kikuyu vote, may as well, decide who becomes the next president, if not, he must be consulted, as the next government is being formed.

I’m told Jimi isn’t shy to be seen as the GEMA candidate, even as he stakes his claim as a national leader who happens to be a Kikuyu. His campaign theme is itwika, Kikuyu word that connotes a generational shift and take over, essentially a break with the past political leaders and past electoral behaviour. His chief competitors Raila and Ruto have employed political sherpas to scale the mountain. While Ruto has seemingly risen to the peak, Raila has been stuck at the base.

Yet, at this point, we must ask: Is Jimi the fifth horseman?