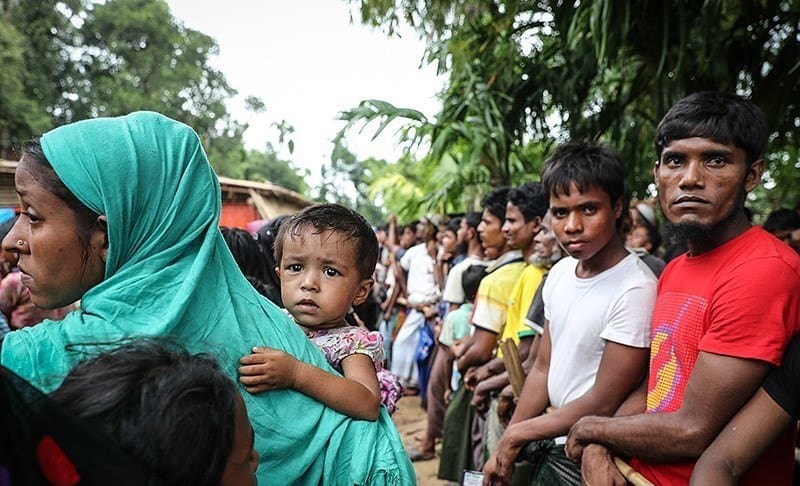 The Rohingya are Muslims who live in majority-Buddhist Myanmar. In 2013 the United Nations described them as one of the most persecuted minorities in the world because under the 1982 Myanmar nationality law they are not recognised as citizens, their movement is restricted, and they are denied state education and civil service jobs.

The position of the Myanmar government is that Rohingyas are ultimately not a national “indigenous race”, but illegal immigrants from neighboring Bangladesh and has thus subjected them to constant military crackdowns that have culminated in what has been described as a purposeful ethnic cleansing.

The Rohingya genocide is this latest series of ongoing persecutions by the Myanmar government against the Muslim Rohingya people. The first wave occurred in October 2016 and ended in January 2017 resulting in the largest human exodus in Asia since the Vietnam War. The second began in August 2017 and is still ongoing.

Due to this violent campaign over a million Rohingyas have fled to neighboring countries; Bangladesh, India, Thailand, Malaysia, and parts of South and Southeast Asia.

Myanmar has however rejected the report and consistently maintained that its operations targeted militant or insurgent threats. The fact that it has not signed up to the ICC complicates the legal processes that could hold it accountable and stop the ongoing genocide. This is where the Gambia comes in.

Why is the Gambia leading the charge?

The Gambia and Myanmar are signatories to the 1948 Genocide Convention which commits them and all participating countries to prevent and punish actions of genocide in war and peacetime.

With the support of the 57-member Organization of Islamic Cooperation (OIC) and a team of international lawyers, The Gambia has asked the International Court of Justice to implement an injunction to ensure Myanmar immediately “stops atrocities and genocide against its Rohingya people.”

The filed case alleges that Myanmar’s campaign against the Rohingya, which includes “killing, causing serious bodily and mental harm, inflicting conditions that are calculated to bring about physical destruction, imposing measures to prevent births, and forcible transfers, are genocidal in character because they are intended to destroy the Rohingya group in whole or in part.”

It also stated that “It is clear that Myanmar has no intention of ending these genocidal acts and continues to pursue the destruction of the group within its territory,” adding that the government “is deliberately destroying evidence of its wrongdoings to cover up the crimes.’’

The Gambia’s justice minister and attorney general, Abubacarr Marie Tambadou, told The Associated Press he wanted to “send a clear message to Myanmar and to the rest of the international community that the world must not stand by and do nothing in the face of terrible atrocities that are occurring around us. It is a shame for our generation that we do nothing while genocide is unfolding right before our own eyes.”

He stressed that it is for this reason that, “Gambia is taking this action to seek justice and accountability for the genocide being committed by Myanmar against the Rohingya, and to uphold and strengthen the global norm against genocide that is binding upon all states.”

Experts say that if the court accepts the case, whatever the outcome, it will draw renewed attention to the immense suffering of the Rohingya people, most of whom now live in refugee camps in the countries they fled to.

The Gambia successfully filed it's Application instituting proceedings and requesting for provisional measures against Myanmar on behalf of the Rohinga People before the International Court of Justice in the Hague pic.twitter.com/HgtVmbxd6G