*Warning: You may find some of the content in this story distressing.

Sam Ondieki is a creative artist. A poet, a writer and a musician. His two novels, The Degenerate and Dandruff: The Mistaken White Hair sit in the library of congress in the USA. He has even played alongside South African reggae star, the late Lucky Dube. Yet he is a man of humble beginnings, growing up in rural Eastern Kenya in a region called Kerina

“It was beautiful growing up there, there were so many of us. In my family alone we were seven and I grew up around cousins and uncles as well. One thing I remember is that I wore my first pair of shoes in class 6. And this wasn’t out of poverty or anything like that, this was just because it was the norm, people never used to wear shoes at that stage back then and if you did, you’d be teased because you’d stand out, you’d be the odd one out.”

“One thing that pushed me to leave was the physical abuse. I rebel against any form of brutality in the world. I hate people fighting, beating each other, beating children. I hate anything violent against anybody else. I don’t remember a day that went by where someone wasn’t getting caned. And I know where these things come from because I’ve read my history. It stems from this idea that for you to be a man you must be brutal; you must prove yourself as this tough guy who is beating and almost killing somebody else. Imagine that coming from your parent… I left immediately after high school.”

“When I first came to Nairobi, I got a job in construction somewhere in Juja. The thing that shocked me was that I had to work even harder here in Nairobi than when I was back home. I had to work very hard just to take care of myself before I could even think about taking care of others. And I had a lot of pressure to keep the job so that back home they didn’t say that I went to Nairobi for nothing. I think maybe if I was a girl, they would have expected me to get married and bring home some livestock, then use that to educate the younger ones.”

So, when did you start your career as a musician?

“I’ve been in the music industry for twenty years; I know all the trickery that goes into it and it hurts me and it makes me cry sometimes. Anyone who has worked in it for many years who deserves the limelight does not get it, because there’s something called a system. It’s a big animal that makes us go through all this fear. These people make us poor and they make us become their slaves. So, I cannot call music a career. Music can never be a career because music cannot be owned by anyone. It’s everyone’s career; everybody loves music. Things like copyright and intellectual property; it’s nonsense. You’re trying to protect an idea like it’s your own, then you pay lawyers to protect you; it’s nonsense. I don’t care about the law because the law does not care about anybody else. Lawyers want money, that’s it. When I was in prison, I met lawyers who were asking for me 300,000 Kenyan Shillings ($3,000) to free my ass. But I’m not afraid of prison.” 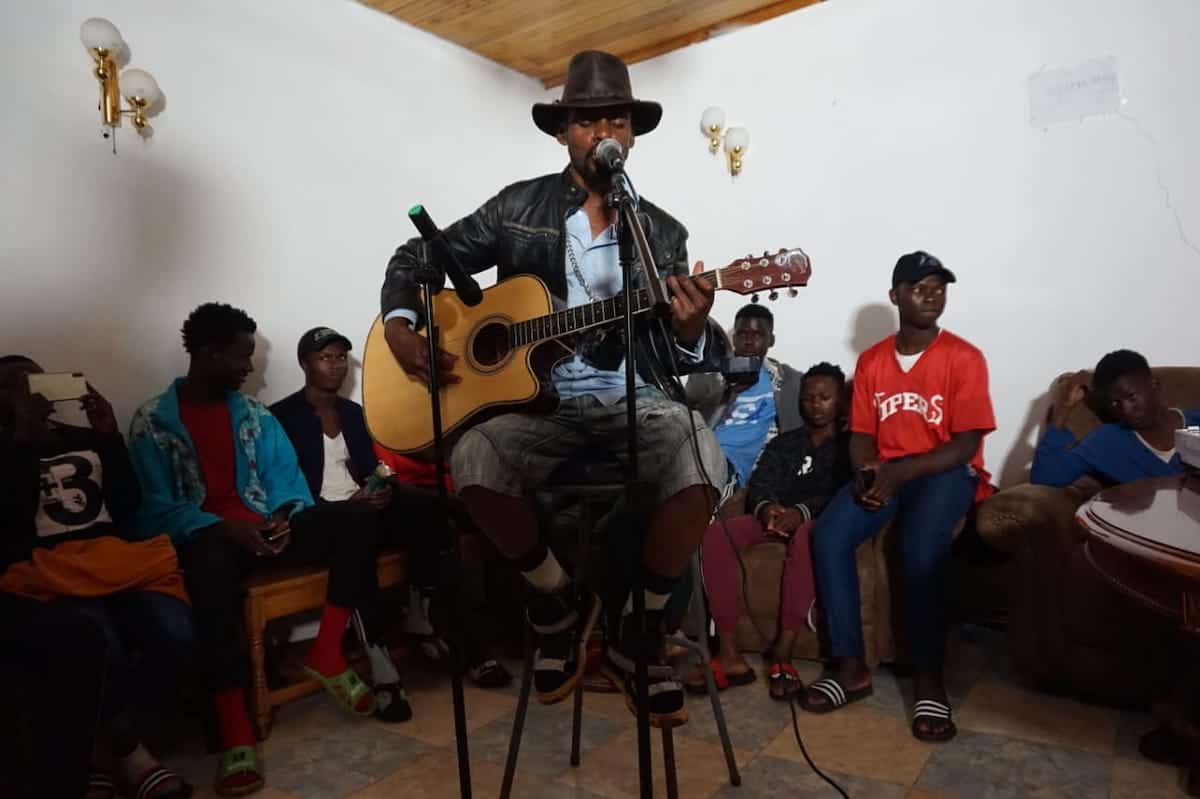 “After that experience, I know one thing, and you can quote me on this, this country does not care about its citizens. They just don’t care. Let me give you an example. After I had my last arrest, they started to think that maybe I have a screw loose and sent me to a mental hospital called Mathare. There I met a man, let’s call him John. John was a curious case for me because he never used to talk to anyone. But he spoke to me. And he told me his name. A lot of people dismissed him because of his silence and because of how he ate – he’d pour the food out of his plate and eat it off the ground. But when he explained to me why he was doing that, he knew what he was talking about. You see, he used to be a doctor in Killimani and he understood a lot of things about the composition of materials. He’d explain to me the effects of eating off plastic plates using his medical terms and this man knew what he was saying.”

“Then one day John climbed into one of the water tanks and drowned himself. He had been there for one week before anyone found him. People had noticed that he was missing, some people mentioned that they saw him climb up the ladder but never saw him climb back down again. It wasn’t until his family, who came to visit him, called the cops when they couldn’t find him. You know there are always people who love you, even if it’s just one person, we have people who love us. One of the police men climbed up the water tank and found him there, bloated with water, the same water we had been using. Everyone was so afraid to help him because people fear the dead. Even the police left! So, I climbed up there and tried to get him. He was hard to hold onto because his skin was peeling off and he was bigger than me cause I’m a small bodied man. During the climb down he started slipping off and I couldn’t hold him so he fell. And everyone ran away.”

“I’m not an authority on the subject of mental health, but because I’ve lived with people who are considered crazy or depressed or mentally unfit, I can tell you it is not what it looks like. People suffer so much. And most people use this introvert/extrovert thing so that they can dismiss people. They say ‘that’s just how they are’. I believe in my heart that people want to be with other people, people want to be celebrated and to party. Nobody really wants to be just there on their own. Anytime you see someone withdraw from someone else, from society… that is a red flag.”

“If I had a message to give anyone… If you want me to be honest, this country runs on hypocrisy, don’t trust anyone, don’t trust nobody. I’ll leave you with a quote from Lucky Dube’s song, Dracula. ‘Don’t trust no one, don’t even trust yourself.”