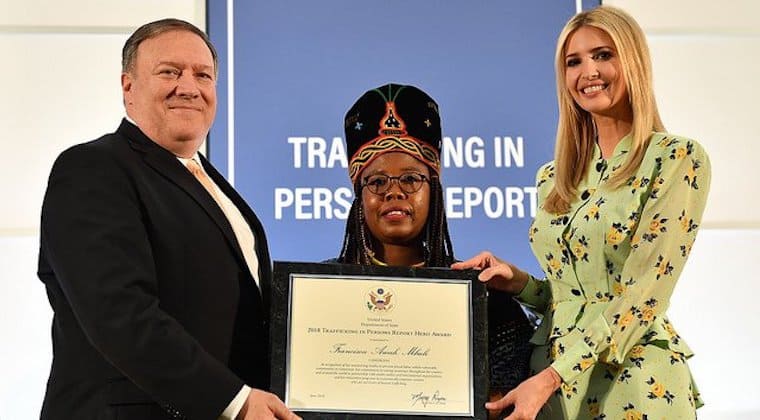 According to CNN, in the spring of 2015, Francisca Awah answered an advertisement for an English-teaching job in Kuwait. When she was offered the job, she accepted as a means to support her two-year-old son as the job offered far better pay than anything she could earn in Cameroon, despite her Master’s degree and fluent English.

That was the start of three years of living in modern slavery, trapped and abused as a domestic worker in Kuwait. Luckily for Awah, deliverance came in the form of Katie Ford, founder and CEO of Freedom For All in the US, an organisation that partners with 11 organisations in six countries to rescue, rehabilitate and reintegrate survivors of human trafficking. Ford coached Awah through her ultimate escape from her captors to a friendly embassy, and then paid for her flight to Cameroon.

Statics show that in a population of 4 million people there are more than 600 000 migrant domestic workers in Kuwait. These migrant workers are particularly vulnerable to forced labour inside private homes. This is not exclusive to Kuwait – the situation prevails in most of the Middle East.

A Human Rights Watch Global Report on Women’s Human Rights stated that “patterns of rape and physical assault, with debt bondage and illegal confinement are common. Kuwait has long depended on foreign workers to be the backbone of its labour. Unfortunately, Kuwait’s law excludes domestic workers from their labour law protections. This exclusion from the labour law creates isolation and denies them even minimal protection against unfair practices.”

The Kuwaiti government has finally introduced a law guaranteeing domestic workers one day off per week, a maximum 12-hour workday, a minimum wage paid monthly and paid annual leave. It has also set up “a government-run central recruitment company intended to reduce recruitment costs and combat illegal recruiting fees”.

Upon returning to Cameroon, Awah began to share her harrowing story in a bid to raise awareness over trafficking. In this time she realised that although prevention was the goal, survivors were also in danger of getting re-trafficked if they returned to face the hardships that put them in the situation in the first place. This led her to set up the non-profit organisation now known as the Survivors’ Network.

With this in mind, and with Awah at the helm, Survivors’ Network has developed a unique approach to survivor empowerment by focusing on economic independence and fostering entrepreneurship among women and girls.

Thanks CNN for using me Awah Francisca Mbuli to shine the lights on the 30th is July.
World Trafficking in Persons Day! https://t.co/nRVA22iSeB

Awah told CNN that in the NGO’s existence, her organisation has advised more than 500 African women trapped in domestic servitude in Kuwait and Lebanon on how to return home. It has also helped about 28 African women free themselves from situations of forced labour and debt bondage. According to TIPHeroes.org, a website dedicated to the TIP Report Heroes, which they describe as “a group of people who are modern-day abolitionists”, Awah has sought out creative ways to reach different communities and socioeconomic groups throughout the country and taken every opportunity to advocate for better protections and support services for trafficking victims.

Earlier in 2018, Awah was named a TIP Report Hero by the US State Department. She was celebrated as an individual who has made a particular contribution to the fight against human trafficking.

“A few years ago, I could have only dreamt of such an honour,” she told the audience of State Department officials at the TIP Report launch ceremony in Washington DC. “To prevent trafficking, people need vocational training to build skills so that they can work and become self-sufficient in their home countries. We can all talk about this issue in our schools and workplaces and over dinner with our families. The more people who know and care, the more people we will save.”