My 5 most epic Mugabe moments, 2014
Advertisement 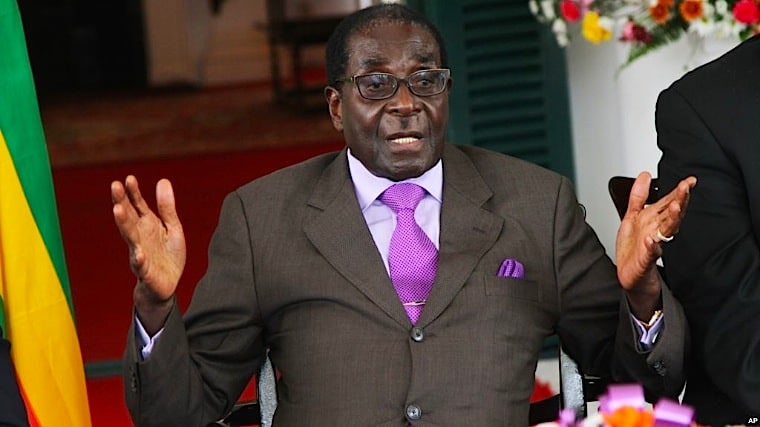 1. Mujuru is a witch

Not every day is the 10th of November and you wake up to a classic #TIA headline like a head of state accusing his Vice of attempted witchcraft. Only in Africa! Of all the vices Joice could have… What is still unclear though is why the juju didn’t work. Maybe the urban myths are true, that in some dark forbidding forest there stands a jacket on a walking stick, guarded by the fiercest men to ever carry guns and until it falls HE RG remains standing. But Mujuru should have known better, even death knows not to F*** with a guy who, in his own words has resurrected more times than Jesus.

You see when you bout with Bob you don’t have the luxury of throwing in the towel. You do not roll over and play dead, wait for the count, Bob is not only a classic political pugilist, he’s a purger. Yeah sure he might synchronise a few Liverpool Kisses and knees to the groin with the referee’s sneezes, but make no mistake, he will knock you out more times than Tyson. Ask Tsvangirai who won the first round of elections in 2008 and was asked not to take off his gloves because there would be a rerun (yes, if you beat Bob we start again). Morgan pulled out of the race but still got his ass kicked from the stands! When Mujuru retired the ink hadn’t even dried on the newspapers and they had to retract. Oh yes, she is still VP…until Bob tells her exactly how to fornicate herself. Poor village girl Teurai!

When I heard that Bob had said that, my reaction was a loud and sure ‘Bullshit!’ The eternal First Secretary of the eternal Ruling Party should be the club’s biggest fan right? Wrong, after addressing a meeting, instead of screaming Pamberi neZanu!’ like some forty-year old virgin screaming ‘allahu-akbar!’ before meeting disappointment on the other side of the white light, Bobby turns around and says, ‘fuck Zanu!’ I am paraphrasing of course but translation is more about the sentiment than the exact wording. The poor guy who stepped up to the mike after him tried to make a joke out of it but the milk had been spilt.

Maybe when you have been a badass for so long and there is no worthy adversary you might start pissing on live wires for fun. Maybe Mugabe believes there can never be a Zanu without him, maybe he wants to think it and would gladly have it burned with him on a pyre, maybe it’s not even his megalomania at work now, but mortality creeping up on him with the realisation of the corruption of a vision of grandeur. Maybe he hates the party like everyone else. Who is to know what Bob thinks?

They called it a slip of the tongue; Bob said it out loud that Morgan won the 2008 Elections with 78% of the vote. You know, the ones that had to be rerun and blah and blah and Mugabe tacitly admitted defeat by consenting to a South African brokered power-sharing deal.

Some speculators with big words from Freud said he suppressed the truth so hard it pressured him and sprung out when it could. I think as a career badass you have the right to kick someone’s ass and remind them there is nothing they can do about it.

Or maybe Bob just grew a conscience and wants to put things in order … Yeah right!

5. The President has the power to appoint and disappoint

Mugabe is the biggest cause of unemployment in Zim. Ask Morgan who still lives on state property even though last year’s election left him unemployed after sitting in an imaginary position for five years. It appears Mugabe can run the country like a tuckshop in the words of my countryman and that’s why he can leave it for his wife in his will. Seriously though, when Joice came into power in 2004 we were told there had been an amendment in the party constitution which demanded that a woman should be a vice president and not a former ZAPU cadre as suggested by the Unity Accord of 1987, which those who support the muzzling of the political voice of a region and the turning of the country into a one-party-state (as Mugabe always wanted) will celebrate on Tuesday.

When Morgan crawled too uncomfortably up Mugabe’s crack, threatening everything he had worked for – his throne, the undisputed rulership of ZANU – Bob had to give him an invisible chair to sit on for half a decade along with the right to call himself ‘prime minister’ on his business cards. I knew that agreement was comedy when for the first time since ever, Mugabe showed up without a speech to the signing. It was like he had been disturbed from important shit but since he had RSVP’d…

Now there are two men in the vice presidency like it has always been before Mujuru. Unless one of them has a clitoris for a penis, unlikely, Mugabe just screwed the same constitutional amendment he made to hide from Mnangagwa by enthroning Mujuru. This time around he did the reverse: empowering Mnangagwa at the cost of Mujuru. Politics is maddeningly encrypted bullshit, and the state media keeps telling us the president has the power to appoint and disappoint and I am starting to think disappoint is the opposite of appoint.

The disease of racism: a basic diagnosis