Two years ago, this month, the World Health Organisation (WHO), formally announced to the world, on March 11, 2020, the outbreak of a deadly plague that in the coming months, would wreak havoc across the globe, killing millions of people, in its wake. By March 2022, it had already decimated six million plus people worldwide, majority of them from continental Europe, the Americas and parts of Asia.

As fate would have it, or is it providence, Africa was largely spared the scourge, a miracle that even the best of its doomsayers, were hard pressed to explain how. With one of the world’s worst healthcare systems, but considered to be the last frontier of mankind’s civilisation, Afro-pessimists and the continent haters, seemed gleeful that Africans this time had been caught really flat-footed and would be depopulated in their millions.

Slightly more than two months earlier, on December 31, 2019, a mysterious strain of pneumonia was detected in Wuhan city, Hubei Province of China. Many of the affected were associated with Wuhan’s wet market. To date, questions linger as to the origin of this vicious viral disease: Was it transmitted from animals to humans or manufactured in a lab? The wet market deals with the sale of animals, including the rare and exotic mammals; bats and pangolins. Whatever the case, WHO named the strain COVID–19 and in no time, it had spread to 210 countries.

The anniversary has been eclipsed by a European war, that had been in the offing for the last eight years, since the Tsarist Vladimir Putin annexed Crimea. Interestingly, Putin completed his invasion of the Ukraine’s peninsula, this month, 2014, even as he sounded the war of drums for the coming years. Two times Europeans have gone to war with each other – 1914 and 1939 – and two times, these fratricidal, internecine quarrels have been called world wars. Will the World War (III) also emanate from continental Europe?

A novel virus — segregation, stigma, fear and an impending armageddon

Modern Kenya and indeed the entire Africa had never experienced a pandemic in recent history. It’s true, central, west and parts of east Africa have experienced bouts of Ebola, the deadly disease that was first detected in 1976 in modern day Democratic Republic of Congo (DRC). Ebola Virus Disease (EVD) sprouts in these areas now and then, but not as an epidemic in the proportions of the coronavirus.

When President Uhuru Kenyatta announced a partial lockdown and a curfew from 7pm–5am, two weeks after WHO’s declaration, on March 25, many urban dwellers especially from Nairobi’s spatial inner cities, where the wretched of the earth live, quickly thought of migrating back to their rural areas. As it is, many did and to date, most have yet to return.

Africa cities are temporal domiciles of migrant wage labour force, deeply-rooted, as it were, in their rural hermitage. Ask any average African city dweller, what they think of whatever city they live in, and without doubt, will tell you, cities are faraway places where you go to eke out a living, always reminding yourself that one foot should be in the city, the other firmly etched in your rural home.

Who would have imagined the pandemic would last two years? Many Kenyans I spoke to in 2020, talked of at most six months. You couldn’t fault them, they did not know what’s a pandemic, much less knew how to deal with one. When HIV/AIDS become a scourge in the late 1980s and much of the 1990s, stretching into the 2000s in this part of the world, Kenyans become even more superstitious – superstitions are fodder that feeds into many of Kenyans’ mystical aura – and apocalyptic, predicting end times, because according to them, the people had sinned and turned against the wishes of their respective deities.

They also become steeped in stigma: woe unto you, if you were suspected of having contracted the big disease with a little name. You would be shunned by family, friends and fraternity that included, your church, professional and work-place groups. “Mysterious” diseases that hit humanity and spread unbridled death in its aftermath, always creates fear (of the unknown) despondency and uncertainty.

So, it has been with coronavirus: it immediately spawned, among Kenyans, fear and armageddon – prophesies that predicted the end of the world as now truly being nigh. This was before they also quickly started segregating and stigmatising people suspected of suffering from mild cough, feeling feverish, or just simply looking, not frail, but fatigued. Their “natural” response to such a person has been to cleverly dissociate themselves from them and avoid meeting them at whatever cost. It didn’t matter they were colleagues or co-relatives.

I attended several burials in the thick of the pandemic, where corpses were dressed in plastic suits, its attendees wearing spacesuits like cosmonauts and the mourners keeping away from each other like strangers in a park.

Once again, the supposedly Chinese proverb – “may you live in interesting times” – became a true embodiment of our current times. Depending on the situation, the proverb could mean either a blessing or a curse. In this case, a curse it was. The onset of COVID-19 in Kenya led to mass layoffs of people who were mostly sole breadwinners of their families. It provided a wicked excuse to corporations and entities that had always wanted to sack their employees, drastically cut their salaries and other benefits, but wondered how they would do it, without seeming incredulous and unempathetic. Now, they had a perfect justification.

The pandemic became a disruptor in every sense of the word. It strained relationships, marital or otherwise, leading to unforeseen heartaches and painful break-ups. “I’m trapped in my house, working from home with my wife,” moaned a friend. “She has turned into a real monster, she’s now my commanding wife, I can’t bear it.” He would carry his laptop drive off, and work from his car, away from his wife, until the restaurants were allowed to open up again.

Worst was to come. “My wife took off, I’m devastated. I cannot believe it,” said a Kenya Airways (KQ) pilot who was summarily sacked. What was painful, to the pilot, was that in a record six months’ time, she had hitched her wagon with another man. “I can’t live with a man who’s no longer bringing in the bacon,” she’s reported to have said.

To the pilot, a mutual friend, his devastation wasn’t so much that his wife had deserted him, as to the reason: running away from him because of suddenly finding himself in financial doldrums. It had never occurred to me that it had never been about mutual sustenance, but what she would gain from me, opined the pilot. 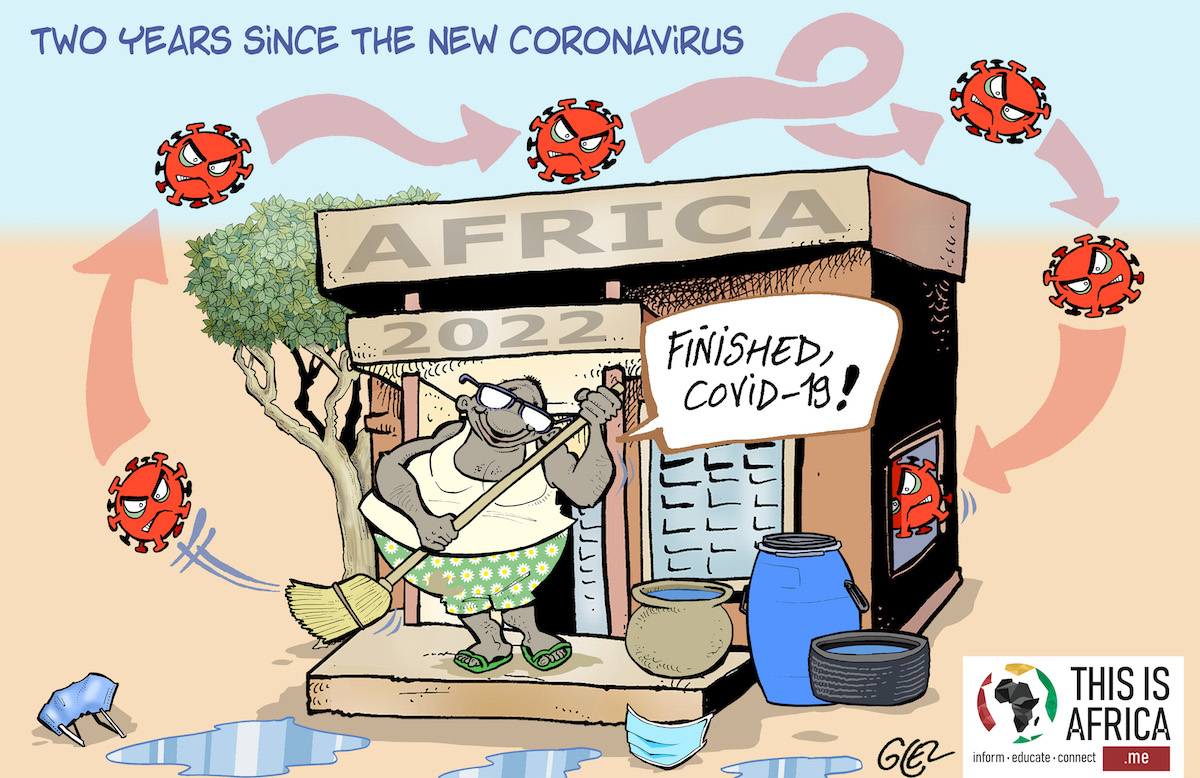 The break-ups didn’t just involve pretenders to middle class, who, most times, oscillate between slipping downwards into the underclass, which they narrowly escaped from, and which terrifies them every time they think they could fall back to, and perpetually building castles in the air. “My wife went to live with her mother, when I lost my job,” confided my much younger friend from one of the notorious Nairobi ghettoes. The couple had a small child, his four-year-old son and he told me it hurt him greatly that he couldn’t be seeing his son every morning. “You know, what really pained me most was that my mother-in-law encouraged her daughter to leave me.”

As coronavirus was upsetting relationships, it also created a new class of nouveaux riche, a cabal of kleptocratic barons now referred to as COVID-19 billionaires. It was crony and crude capitalism at its rawest form. Maximising on the plight of the most gullible and vulnerable, state bureaucrats colluded with tenderpreneurs to steal personal protection equipment (PPE) donations given the country by well-wishers and through bilateral friendships.

The unscrupulous theft of Jack Ma’s gift of test kits, face masks and protective suites to the Kenyan government, quickly springs to mind. The Chinese mogul and philanthropist’s 2020 donation, which was supposed to have been distributed freely, was stolen and later sold to Kenyans.

As coronavirus was upsetting relationships, it also created a new class of nouveaux riche, a cabal of kleptocratic barons now referred to as COVID-19 billionaires

As it is, that state theft, led to one of the most quixotic statements made by the beleaguered Deputy President William Ruto, who since March 2018, has been effectively ostracised by his boss President Uhuru Kenyatta. He has not only been shunned, but the tag “thief” has been strenuously made to appear to be synonymous with his name. Taking to his twitter handle, the Deputy President, said, “at least it won’t be possible to be blamed for what someone has said started in Wuhan as a virus landed in Italy as a pandemic and now in Kenya as a multi-billion shilling corruption enterprise in Kenya. Wacha niendelee kama spectator (let me stay on the side lines watching.)”

Was it sheer coincidence that the Kenyan government removed the restriction on wearing of masks in public areas on the pandemic’s second anniversary on March 11? Governments hardly spring popular edicts from nowhere and without a reason. With just four months to what will be a hotly contested presidential election, no one is leaving anything to chance, much less the state, which has shown it has huge stake in the succession elections.

If the police didn’t enrich themselves during this COVID-19 period, trust me, they’ll never get rich

A not-so-loudly stated reason for the removal was the fact the government always knew state security agencies, mainly the regular police, had also enriched itself massively from its predatory tactics on the citizenry. After being given a cart blanche mandate by the government to deal ruthlessly with any Kenyan defying COVID-19 protocols, the police took it upon themselves to harass, maim and even kill Kenyans. But above all, they resorted to what they know best: extorting from Kenyans.

Said a street hawker to me: “if the police didn’t enrich themselves during this COVID-19 period, trust me, they’ll never get rich.”