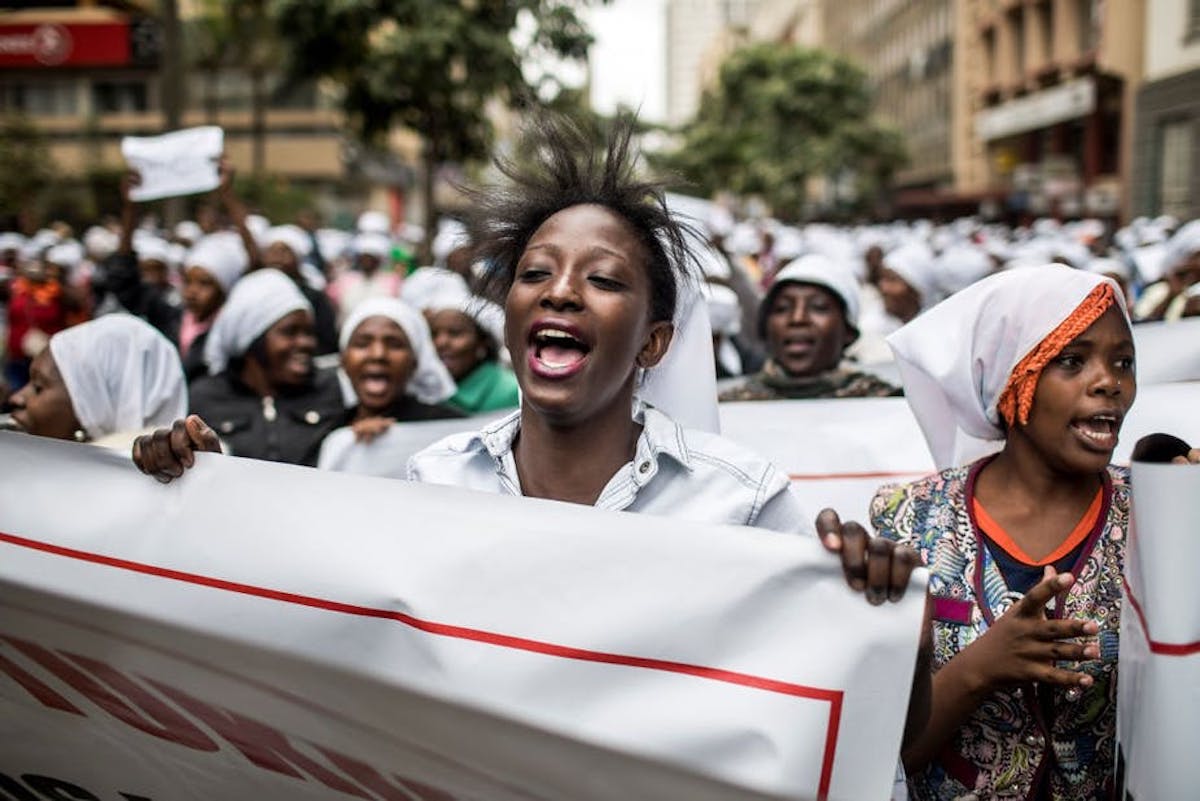 In December 2020, a leading Kenyan political party official, Edwin Sifuna, made vulgar remarks against a woman member of parliament. While campaigning for their political allies in a by-election, Sifuna said the woman is “not attractive enough to rape”.

In January this year, controversial bishop David Gakuyo, who is seeking election as a member of parliament, made demeaning remarks about two women politicians. He accused them of seeking votes while “swinging bare behinds”.

Sifuna and Gakuyo later made half-hearted apologies through the police after complaints were lodged about the language they used. The National Cohesion and Integration Commission, a government agency tasked with taming the excesses of politicians, was largely silent.

In the run-up to Kenya’s general elections in August 2022, the use of aggressive language is likely to persist. Based on my research, I believe this is the reality of Kenyan society – a reality that increasingly gets in the way of women’s participation in politics.

In my research, I set out to understand the grammar of patriarchy that stands in the way of women’s participation and engagement with elections.

Drawing on examples from recent events, I identify a range of factors that perpetuate patriarchal attitudes. These range from the language used in the media to attendant stereotypes and cultural traditions.

The 2017 Kenyan general elections marked an improvement from the 2013 poll in the number of women elected to serve in different capacities. The elections saw the first ever women governors and senators – six in total – emerge victorious from positions that were previously held by men in 2013. Kenyans elect 47 governors and 47 senators in a general election.

Despite efforts to improve the involvement of women in politics, the electoral platform in Kenya is still largely dominated by men. Overall, women took just 9% of the total elected posts in 2017.

Women face a host of obstacles: inadequate political support from their parties, particularly in the primaries; a lack of financial resources; gender-based violence; gender stereotyping; and patriarchal structures across society.

There are many ways in which elections are gendered in Kenya. In my paper I explore, in particular, the use of language and grammar.

My research considers the grammar of patriarchy by looking at examples in the Kenyan context and finds that gendered language permeates the landscape.

Candidates and the dominant voices in media are mostly men. Elections are described in analogies drawn mainly from traditionally masculine domains of war and sports. Headlines often speak of ‘do-or-die’ contests and battleground regions.

Now we’ll start the practice where if you want to get elected, you declare your intention with your wife or husband by your side.

The former Nairobi governor Evans Kidero dismissed one of his female competitors by saying: “Nairobi is a serious city … you can’t elect a cougar”. ‘Cougar’ is the term used to describe an older woman who preys on younger men for sex.

Married female politicians also face their share of derision. When the issue of their spouses is floated, it often comes with nuances of tribalism.

Joyce Laboso, one of Kenya’s first three women to be elected governor in the 2017 elections, faced sexist attacks from supporters of her competitor. She was called an outsider because her husband comes from a different ethnic community than her own. She was told that she no longer belongs to her community, and she should seek election in the area her husband comes from.

In the contest for the Embu County senate seat, aspirant Lenny Kivuti urged residents not to vote for one of his female opponents because she would export resources to her husband’s area, which is in a different county.

Kenya’s electoral process has often highlighted the fact that male politicians don’t shy away from aggressive confrontations in campaigns against a woman.

A TV interview in 2017 that was meant to give aspirants for the Nairobi County governor seat a chance to sell their agenda illustrated the depths of this negative campaigning.

Miguna Miguna, a man, tore into a female opponent for the seat, saying she is “so beautiful, everybody wants to rape her. You are chasing men all over, nobody wants you. You think you’re beautiful, you are not.”

In another incident, President Uhuru Kenyatta, in an altercation with the governor of Mombasa County, sarcastically reminded the latter that “mimi sio bibi yake” (I am not his wife). He was telling the governor off for ‘following him around’.

In political competition, patriarchy favours the male candidate. This is because, culturally, epithets that are anti-woman are widely used, and to a certain extent, normalised.

There are proverbs, oral narratives and traditional songs that cast the image of the woman in leadership in negative light. The woman has been portrayed as “unreliable, disobedient, irresponsible, disloyal, disagreeable, adulterous, cunning, senseless, easily cheated, forgetful, not dependable, evil, trickster, lazy, etc.”

This negative portrayal contributes to “social gender constructs that call for control of women in society and legitimise male dominance”.

Based on these cultural obstacles, women who venture into politics are largely judged on femininity rather than on substance. Due to this, the woman candidate has been forced to endear herself to the voters on the basis of appearance, rather than issues.

Words like ‘manzi’, ‘supuu’ and ‘mrembo’, common slang words that mean a beautiful woman, are bandied around a woman’s political campaign.

Those women who have succeeded in holding high office have often been perceived as exceptional women who ‘act like men’. Yet, they often face criticism for being unfeminine and unlikeable.

Martha Karua, a former presidential candidate and Cabinet minister, was described as the ‘only man in (former President Mwai) Kibaki’s cabinet’ in Kenya’s 2008 coalition government.

What needs to be done

Patriarchy stubbornly refuses to give way in Kenya. Nevertheless, the rise of the woman politicians is gaining pace. Rural constituencies are producing more and more women leaders, signalling a positive step towards deepening Kenya’s democracy.

But a lot remains to be done – both in terms of legislation and from a human rights perspective – to improve gender equity in Kenyan electoral politics.

The 2010 Kenyan constitution guarantees representation that should reflect the face of the nation, especially in terms of gender equality. It requires that:

the state shall take legislative and other measures to implement the principle that not more than two-thirds of the members of elective or appointive bodies shall be of the same gender.

The two-thirds gender rule, however, has yet to be fully enforced. It would be a major boon for women if it was. But society’s mindset should also complement issues that the constitution seeks to protect.

Us and Them — Racism at Ukraine’s border and Western media othering Africans: Symptoms of an enduring problem