It was supposed to have been a super Sunday announcement for both Azimio-OKA and Kenya Kwanza (KK) coalitions on the naming of their respective running mates. But no sooner had William Ruto of KK named his deputy, than Prof Makau Mutua presidential campaign spokesman for Raila Odinga quickly penned a press release that said Azimio-OKA would reveal its running mate the following day, Monday 16.

The lead-up to Raila and Ruto naming their deputies had been reduced to a Tom and Jerry like game; blindsiding and second-guessing each other, hoping to wrongfoot one another and eventually upstage each other. In the end, both coalitions’ choices were nothing to report home about: well, Ruto somehow pulled the rug below many people’s expectation by naming the Mathira MP, Rigathi Gachagua as his deputy, while Raila’s choice had been an open secret for the last several weeks.

Yet, between Azimio and Kenya Kwanza, Azimio had the biggest headache in picking Baba’s running mate. With two huge egos to massage – Karua and Stephen Kalonzo Musyoka – the rest of the pack, including the much-fancied Peter Kenneth, having been dumped a long time ago, the contest was reduced to who could marshal the most powerful lobby.

In the early stages, Peter Munya, the cabinet secretary for Agriculture looked like he was headed somewhere, only to be upstaged by gendered politics. For the last two months, I’ve been to Meru County three times. The story swirling around Meru is that Munya, who hails from Tigania East, was prevailed upon not to resign from his CS position on condition that he would be made Raila’s running mate, only to be short changed once he had already been boxed in. To say that Merus are happily chewing miraa is to not have been in Meru lately. 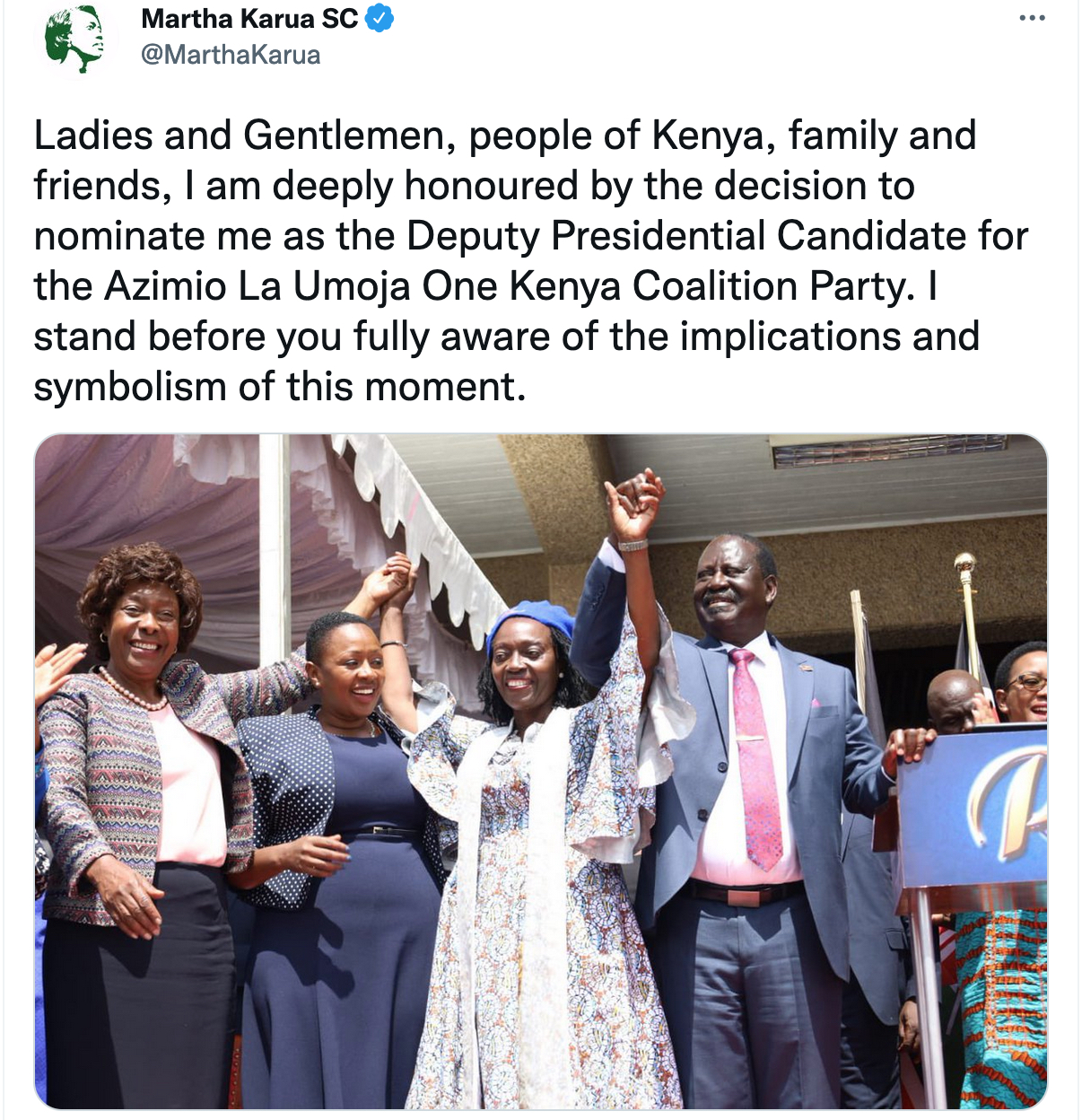 Karua’s lobby group was led by Prof Makau Mutua; a long time fan of the former MP. The law lecturer has no time for Kalonzo. After being elevated as Baba’s presidential campaign spokesman, he commanded clout and closeness to Azimio’s power gang. Apart from spinning for Baba, Karua became his other pet subject. His subject received a kick, because between Karua and Kalonzo, Baba, this time round, favoured his former nemesis.

Yet, Karua wasn’t the automatic choice of the chairman of the Azimio-OKA alliance, President Uhuru Kenyatta. His, was always the indulged son of the late president Daniel Toroitich arap Moi, Gideon Moi, the chairman of the moribund Kanu party. Unable to publicly canvass for his candidate, President Uhuru is grudgingly ready to accept Karua, on condition that “a woman will never be king in Kikuyuland.” My sources told me President Uhuru believes the Kikuyu-nation will never have another Wangu wa Makeri, well, not as long as he is around.

The fiery Murang’a-born wa Makeri, was a chieftess, the only one of her kind, in the 19th century, infamous for one time addressing a baraza (a taboo), but even more sacrosanct was that as she spoke to the men, she chose to sit, not on a stool, but on the back of a man.

Musalia Mudavadi, a one-time vice president albeit for one of the shortest times (just about two months) in the history of Kenya, in the last days of Moi, would have made an obvious choice for Kenya Kwanza alliance. But this current succession politics, aren’t so obvious.

Of all the running mates from across the coalitions’ divide, Karua has hogged the most attention – because of her gender and political past. So, let’s briefly examine her past in politics. You must give it to Karua – she exhibits a dogged determination and single-mindedness like no other.

Francois Mitterrand, the late socialist president of France, once famously described baroness Margaret Thatcher as, “having the eyes of Caligula and the lips of Marilyn Monroe.” It was a back-handed compliment by Mitterrand, of Thatcher’s status as a woman of substance, a ruthless political player and (the scourge of the European Union).

The Roman emperor nicknamed Caligula, which means “a little sandal”, became despotic and crazy when he assumed the throne. Many Kenyans have compared Karua to Thatcher, even referring to her as the Iron Lady – a moniker that Thatcher acquired after she became the first female Conservative British Prime Minister in 1979. Thatcher ruled UK for 10 years before being ignominiously forced out by a palace coup within her party in 1990.

Kenyans and the Press, which repeatedly like calling Karua an iron lady would be pleasantly surprised to learn that Karua actually detests being referred to as a “woman who is a man.”

Kenyans and the Press, which repeatedly like calling Karua an iron lady would be pleasantly surprised to learn that Karua actually detests being referred to as a “woman who is a man.” The fact of the matter is that she has tried running away from that label, hoping that Kenyans and the electorate in particular, can appreciate her soft underbelly.

In October 2011, she sought the indulgence of the House speaker Kenneth Marende, when the late Internal Security Assistant Minister Orwa Ojode referred to her as ‘iron lady’. “The person, he is referring to must be a stranger in the House,” said Karua, in reference to Ojode’s calling her the iron lady.

Karua has come a long way. In March 1991, the then 34-year-old Martha Wangari Njoka, a criminal lawyer practicing in Nairobi told a New York Times journalist, “you will find a man so liberal in all his relationships except at home. Many profess the idea, but will not treat you as an equal partner. Once you are a Mrs., the husband will treat you as though you are bound to him and the home.”

As a long serving Democratic Party (DP) of Kenya member loyal to Mwai Kibaki, then DP chairman, who assumed the presidency in 2003, she hoped he would make her the Minister for Justice and Constitutional Affairs, a coveted position that went to Kiraitu Murungi instead.

According to the then DP functionaries, her argument was simple and straight forward – she was Kiraitu’s senior in DP – Kiraitu, it should be recalled, started his political career in Ford Kenya, before jumping ship and finally finding refuge in DP in 1997. Secondly, she argued she had been fiercely loyal to Kibaki. She felt that she had been shortchanged and was soar, but she kept her cool, took the Ministry of Water docket, where she did a commendable job injecting water reforms till December 2005.

It was Karua’s first clear instance, that although, many “a man may profess the idea of liberalism in all his relationships, he will not treat you as an equal partner,” not only at home, but also in the political realm.

She identified herself as one of President Kibaki’s frontline generals, especially in the lead-up to the controversial 2007 general election. Her sterling performance she put up solo when defending President Kibaki’s win, which was being contested by the Orange Democratic Party (ODM), put her head above shoulders over all the other presidential advisers and supporters.

“At the end of it all, they gave the Deputy Prime Minister to a man whose only claim to glory and political standing is that he has royal blood and supposedly political pedigree,” one of Karua’s aide, who then worked in her campaign team, told me. “Martha was so angry, so bitter, so upset, she could not take it, you can call it whatever you want – people accuse her of throwing tantrums – any normal human being would have reacted just like Martha did.”

For a second time the men had humiliated Karua and showed her even though they professed liberalism, they could never consider her their equal partner. Five months after vociferously defending the government and President Kibaki, Karua announced to the world in July 2008, she would be gunning for the presidency. From then on, Karua, started seeing faults she wasn’t seeing in government earlier on.

“Martha Karua now talks of rampant corruption in the government, corruption cannot be bad and happening only when she’s out of government,” said an MP to me back then. “When Karua was in government, there was no corruption and those people attacking the state over corruption, were described by Karua as ‘insincere and saboteurs’”.

On June 11, 2006, in Nakuru, Karua, then the Justice and Constitutional Affairs minister, talked of “political vultures, who have taken (the Artur Brothers’ saga, a long saga that is outside the scope of this article) as an opportunity to attack the government.” Three months later, in September, she accused John Githongo, the former Ethics and Governance PS, “of not co-operating with the investigators.”

In January 9, 2008, Karua gave a straight talk to BBC’s Stephen Sakur, who hosted her in the special program Hard Talk. Talking tough and fulminating with an unbridled anger, Karua accused, “ODM of planning mayhem if they lose.” She went ahead and charged that ODM had equally “planned ethnic cleansing” and the international community was ignoring the starting of genocide.”

Martha may have had her excesses, but even Paul on his way to Damascus saw the light, she should be forgiven for any of her political transgressions

The ODM brigade, which until February, 2022 was still insulting Karua, has now fallen in line, praising her as the beacon of constitutional justice, political morality, a reform crusader and a strong-willed leader. The re-discovery of her reform credentials and steadfastness by the ODM brigade, is to say the least, very interesting. The pursuit of (presidential) power is like swallowing an aphrodisiac.

In a show of braggadocio and unmitigated state power, she warned Edward Clay, then British High Commissioner to Kenya that he had been “PNG-ed”, meaning he had been declared persona non grata. Clay, who, was also hosted by Sakur, thinking that she was bluffing went to the Kenyan High Commission residence in London to enquire about Karua’s TV show pronouncement. Joe Muchemi, who was then the High Commissioner, confirmed to Clay that in fact it was true that he was unwelcome in Nairobi.

In 2013, campaigning for the presidency Karua categorically said she didn’t “admire (Raila’s) politics, hence should retire.” Now that she has been named a running mate, creating an illusion of one day becoming madam president, perhaps she has now changed her mind and has found something to admire in Raila.

Prof Makau Mutua – a long time Karua advocate-in-chief and cheer leader, then argued that her hawkish past, her incorrigible defense of the Narc/Kibaki government should not whitewash her “reform” credentials. “Martha may have had her excesses, but even Paul on his way to Damascus saw the light, she should be forgiven for any of her political transgressions.” Recently, he was back to his eternal theme of forgiveness, and again asked Kenyans to forgive Karua for her “political transgressions.”

The question then as now, has always been, has Martha Karua ever asked for forgiveness?