Is military intervention in Libya the answer?
Advertisement 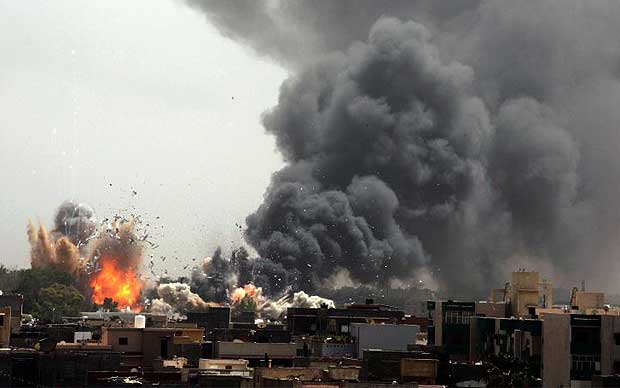 There have been three attempted coups against the struggling transitional government in 2014 alone.
Aside from the armed groups, regular civilians seem wary of the government or prospects for stability. The fact that Libya’s 2014 election saw a mere 630 000 votes cast, a drop from the three million cast during the 2012 election, illustrates the pervasive disillusionment.

Libya has yet to recover from the loss of infrastructure, economic strain as well as the political vacuum left behind after NATO’s 2011 intervention. In spite of this, a handful of states are in favour of yet another military adventure into the North African state.

France has called for action to be taken against what it calls the ‘terrorist threat on Europe’s doorstep.’ There have been indications that Egypt would be a willing participant to military action, allegedly to prevent instability from spilling over from their Libyan neighbours. In light of a number of questionable post-9/11 interventions, the issue is whether military intervention is, in fact, the way to contain Libya’s instability, or whether it would only sink the country further into chaos.

For a number of reasons, military intervention is short-sighted and unsuited to the current situation. Firstly, the prevailing anarchy in Libya stems from political discord which requires political, rather than military, responses.

Libya’s transitional government has, during the last three years, been unable to exercise control over large parts of Libyan territory, including airports, ports and economically crucial oil fields. The government’s inability to foster control and provide security has made it even more difficult for it to gain legitimacy among the people.

Linked to these political challenges, the single biggest impediment to stability in Libya is the large number of armed militias currently in control of Libyan territory and resources. The government has not been able to incorporate these groups into legitimate state bodies since the revolution, and there are now around 13 major armed groups operating out of the reach of the government.

A number of these armed groups (which were instrumental in bringing down the former regime) have legitimate grievances, among them the government’s attempts to prevent them from participating in decision-making processes. The crucial question is how intervening forces propose to distinguish between those groups with legitimate grievances, who are open to negotiating; and those vying for power, merely intent on violence and destabilisation.

It is important to bear in mind that an estimated 2 000 to 3 000 Libyan fighters have already joined the ranks of the Islamic State of Iraq and Syria (ISIS). Military aggression, with Western involvement particularly, will only further alienate already marginalised groups and could be the tipping point for disenfranchised Libyans leaning towards radicalisation. A further contributor to the current violence is the plethora of arms left behind after the 2011 revolution. A key issue – yet to be addressed – is disarmament: how the government proposes to disarm militias (who are unlikely to give up their newfound authority easily), as well as the civilian population, who have taken security into their own hands.

There are also concerns that the conflict has turned into a proxy war, with regional rivalries being played out in Libya, making the prospect of intervention even more problematic. Within Libya and the broader region, the Saudi Arabia-United States of America-Egypt-United Arab Emirates (UAE) bloc seems intent on countering growing Turkish-Qatari influence, thereby maintaining regional status quos.

In August 2014, reports emerged of airstrikes carried out on Libyan groups by Egypt and the UAE. The attacks appeared to be in support of the militia led by former Libyan general Khalifa Haftar, who was also responsible for two of the 2014 coup attempts (the common ground between Haftar and the Egyptian-UAE leadership being an aversion to the rise of political Islam in the region).

The fact that unsanctioned airstrikes have already taken place without reproach by the United Nations (UN) and the broader international community is a cause for concern, as it indicates a disregard for international law. Such unilateral action could set a dangerous precedent and might be damaging to the rule of law if other states are emboldened to act in the same way.

The history of botched interventions over the last decade is another reason to be wary of military action. The United States invasion of Afghanistan has, after 10 years, failed to defeat the Taliban or al-Qaeda, both of which have only expanded their operations during this time, and has only stunted mechanisms for a stable, functioning state. In Iraq, intervention failed to bring about democracy and replaced a brutal dictatorship with an equally brutal oligarchy, which has succeeded only in dividing the country up along violent sectarian lines.

States calling for intervention have not mentioned either of the above and, in reality, such missions often lack exit strategies and turn into lengthy affairs, thereby losing their legitimacy and appeal to local populations.

Thus, it is evident that any intervention could backfire with serious consequences for stability in the Maghreb and the Middle East. If the international community is to effectively address the issue, it could begin by assisting the state with mediation efforts and the rebuilding of the state within a democratic framework. Over 40 years of dictatorship means that Libya is without strong state institutions.

The previous regime may have been dismantled, but efforts to constructively fill the vacuum have been weak. Along with an overhaul of judicial and law enforcement bodies, solving the crisis requires a comprehensive plan for reconciliation and dialogue that recognises all the factions within Libya.

It is worth considering whether it may be wiser to rope in armed groups through political processes, rather than antagonise them with armed force. Until there is a functioning, inclusive state, the current problems are set to continue. It is difficult to understand how a military response could solve such intricate internal political and civic issues.

Why are expats paid more than locals?