In the last quarter of 2021, I visited Murang’a County twice: In September, we were in Kandiri in Kigumo constituency. We had gone for a church fundraiser and were hosted by the Anglican Church of Kenya’s (ACK), Kahariro parish, Murang’a South diocese. A month later, I was back, this time to Ihi-gaini deep in Kangema constituency for a burial.

The church function attracted politicians: it had to; they know how to sniff such occasions and if not officially invited, they gate-crash them. Church functions, just like funerals, are perfect platforms for politicians to exhibit their presumed piousness, generosity and their closeness to the respective clergy and the bereaved family.

The church, which was being fund raised for, being in Kigumo constituency, the area MP Ruth Wangari Mwaniki, promptly showed up. Likewise, the area Member of the County Assembly (MCA) and of course several aspirants for the MP and MCA seats, also showed up. 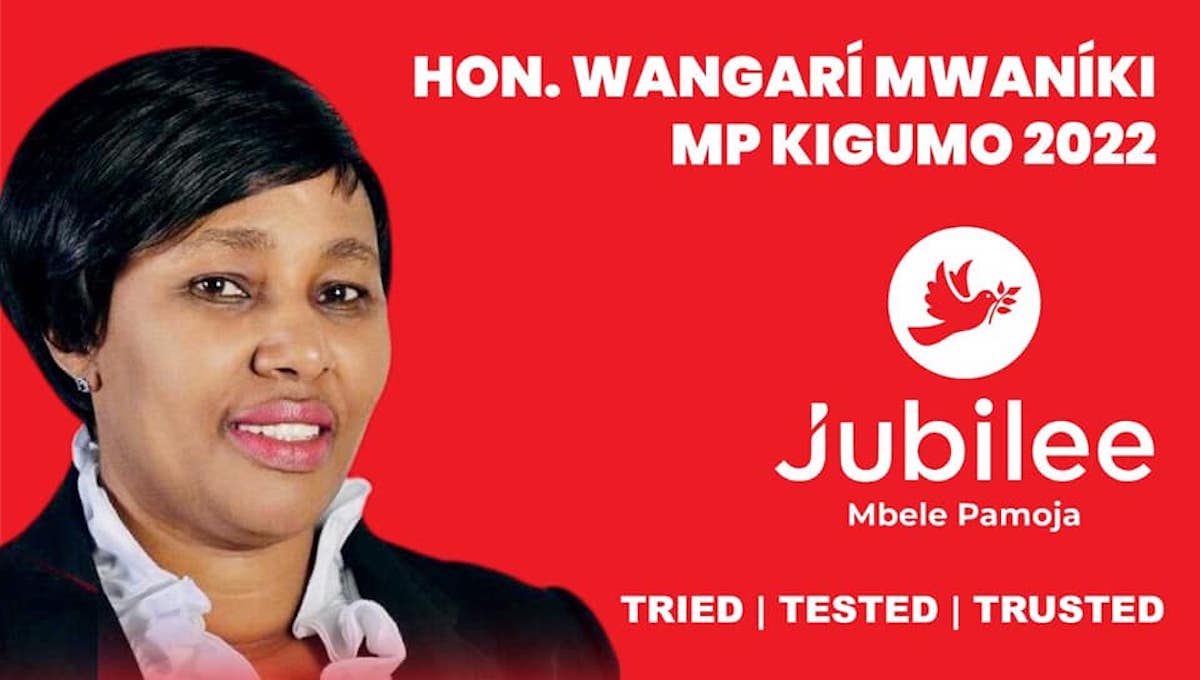 Church and secular politics often sit cheek by jowl and so, on this day, local politics was the order of the day. I couldn’t have speculated on which side of the political divide Murang’a people were, until the young man Zack Kinuthia Chief Administrative Secretary (CAS) for Sports, Culture and Heritage, took to the rostrum to speak.

A local boy and an Uhuru Kenyatta loyalist, he completely avoided mentioning his name and his “development track record” in central Kenya. Kinuthia has a habit of over-extolling President Uhuru’s virtues whenever and wherever he mounts any platform. By the time he was done speaking, I quickly deduced he was angling to unseat Wangari. I wasn’t wrong; five months later in February 2022, Kinuthia resigned his CAS position to vie for Kigumo on a Party of the National Unity (PNU) ticket.

He spoke briefly, feigned some meeting that was awaiting him elsewhere and left hurriedly, but not before giving his KSh50,000 donation. Apparently, I later learnt that he had been forewarned, ahead of time, that the people were not in a mood to listen to his panegyrics on President Uhuru, Jubilee Party, or anything associated to the two. Kinuthia couldn’t dare run on President Uhuru’s Jubilee Party. His patron-boss’s party is not wanted in Murang’a.

I spent the whole day in Kandiri, talking to people, young and old, men and women and by the time I was leaving, I was certain about one thing; The Murang’a folks didn’t want anything to do with President Uhuru. What I wasn’t sure of is, where their political sympathies lay.

I returned to Murang’a the following month, in the expansive Kangema – it is still huge – even after Mathioya was hived off from the larger Kangema constituency. Funerals provide a good barometer that captures peoples’ political sentiments and even though this burial was not attended by politicians – a few senior government officials were present though; political talk was very much on the peoples’ lips.

What I gathered from the crowd was that President Uhuru had destroyed their livelihood, remember many of the Nairobi city trading, hawking, big downtown real estate and restaurants are run and owned largely by Murang’a people. The famous Nyamakima trading area of downtown Nairobi has been run by Murang’a Kikuyus.

In 2018, their goods were confiscated and declared contrabrand by the government. Many of their businesses went under, this, despite the merchants not only, whole heartedly throwing their support to President Uhuru’s controversial re-election, but contributing handsomely to the presidential kitty. They couldn’t believe what was happening to them: “We voted for him to safeguard our businesses, instead, he destroyed them. So much for supporting him.”

We voted for him to safeguard our businesses, instead, he destroyed them. So much for supporting him

Last week, I attended a Murang’a County caucus group that was meeting somewhere in Gatundu, in Kiambu County. One of the clearest messages that I got from this group is that the GEMA vote in the August 9, 2022, presidential elections is certainly anti-Uhuru Kenyatta and not necessarily pro-William Ruto.

“The Murang’a people are really yet to decide, (if they have, they are keeping the secret to themselves) on who they are going to vote for as a president. And that’s why you see Uhuru is craftily courting us with all manner of promises, seductions and prophetic messages.” Two weeks ago, President Uhuru was in Murang’a attending an African Independent Pentecostal Church of Africa (AIPCA) church function in Kandara constituency.

At the church, the president yet again threatened to “tell you what’s in my heart and what I believe and why so.” These prophecy-laced threats by the President, to the GEMA nation, in which he has been threatening to show them the sign, have become the butt of crude jokes among Kikuyus.

Corollary, President Uhuru once again has plucked Polycarp Igathe away from his corporate perch as Equity Bank’s Chief Commercial Officer back to Nairobi’s tumultuous governor seat politics. The first time the bespectacled Igathe was thrown into the deep end of the Nairobi murky politics was in 2017, as Mike Sonko’s deputy governor. After six months, he threw in the towel, lamenting that Sonko couldn’t let him even breathe.

Uhuru has a tendency of (mis)using Murang’a people

“Igathe is from Wanjerere in Kigumo, Murang’a, but grew up in Ol Kalou, Nyandarua County,” one of the Mzees told me. “He’s not interested in politics; much less know how it’s played. I’ve spent time with him and confided in me as much. Uhuru has a tendency of (mis)using Murang’a people. President Uhuru wants to use Igathe to control Nairobi. The sad thing is that Igathe doesn’t have the guts to tell Uhuru the brutal fact: I’m really not interested in all these shenanigans, leave me alone. The president is hoping, once again, to hopefully placate the Murang’a people, by pretending to front Igathe. I foresee another terrible disaster ultimately befalling both Igathe and Uhuru.”

Be that as it may, what I got away with from this caucus, after an entire day’s deliberations, is that its keeping it presidential choice close to its chest. My attempts to goad some of the men and women present were fruitless.

Murang’a people like reminding everyone that it’s only they, who have yet to produce a president from the GEMA stable, despite being the wealthiest. Kiambu has produced two presidents from the same family, Nyeri one, President Mwai Kibaki, who died on April 22. The closest Murang’a came to giving the country a president was during Ken Matiba’s time in the 1990s. “But Matiba had suffered a debilitating stroke that incapacitated him,” said one of the mzees. “It was tragic, but there was nothing we could do.”

Murang’a people like reminding everyone that it’s only they, who have yet to produce a president from the GEMA stable, despite being the wealthiest

It is interesting to note that Jimi Wanjigi, the Safina party presidential flagbearer is from Murang’a County. His family hails from Wahundura, in Mathioya constituency. Him and Mwangi wa Iria, the Murang’a County governor are the other two Murang’a prominent persons who have tossed themselves into the presidential race. Wa Iria’s bid which was announced at the beginning of 2022, seems to have stagnated, while Jimi’s seems to be gathering storm.

Are the Murang’a people prepping themselves this time to vote for one of their own? Jimi’s campaign team has crafted a two-pronged strategy that it hopes will endear Kenyans to his presidency. One, a generational, paradigm shift, especially among the youth, targeting mostly post-secondary, tertiary college and university students.

“We believe this group of voters who are basically between the ages of 18–27 years and who comprise more than 65 per cent of total registered voters are the key to turning this election,” said one of his presidential campaign team members. “It matters most how you craft the political message to capture their attention.” So, branding his key message as itwika, it is meant to orchestrate a break from past electoral behaviour that is pegged on traditional ethnic voting patterns.

The other plunk of Jimi’s campaign theme is economic emancipation, quite pointedly as it talks directly to the GEMA nation, especially the Murang’a Kikuyus, who are reputed for their business acumen and entrepreneurial skills. “What Kikuyus cherish most,” said the team member “is someone who will create an enabling business environment and leave the Kikuyus to do their thing. You know, Kikuyus live off business, if you interfere with it, that’s the end of your friendship, it doesn’t matter who you are.”

Can Jimi re-ignite the Muran’ga/Matiba popular passion among the GEMA community and re-influence it to vote in a different direction? As all the presidential candidates gear-up this week on who they will eventually pick as their running mates, the GEMA community once more shifts the spotlight on itself, as the most sought-after vote basket.

Both Raila Odinga and William Ruto coalitions – Azimio la Umoja-One Kenya and Kenya Kwanza Alliance – must seek to impress and woe Mt Kenya region by appointing a running mate from one of its ranks. If not, the coalitions fear losing the vote-rich area either to each other, or perhaps to a third party. Murang’a County, may as well, become the conundrum, with which the August 9, presidential race may yet to be unravelled and decided.