South Africa: None of the Above wins local elections 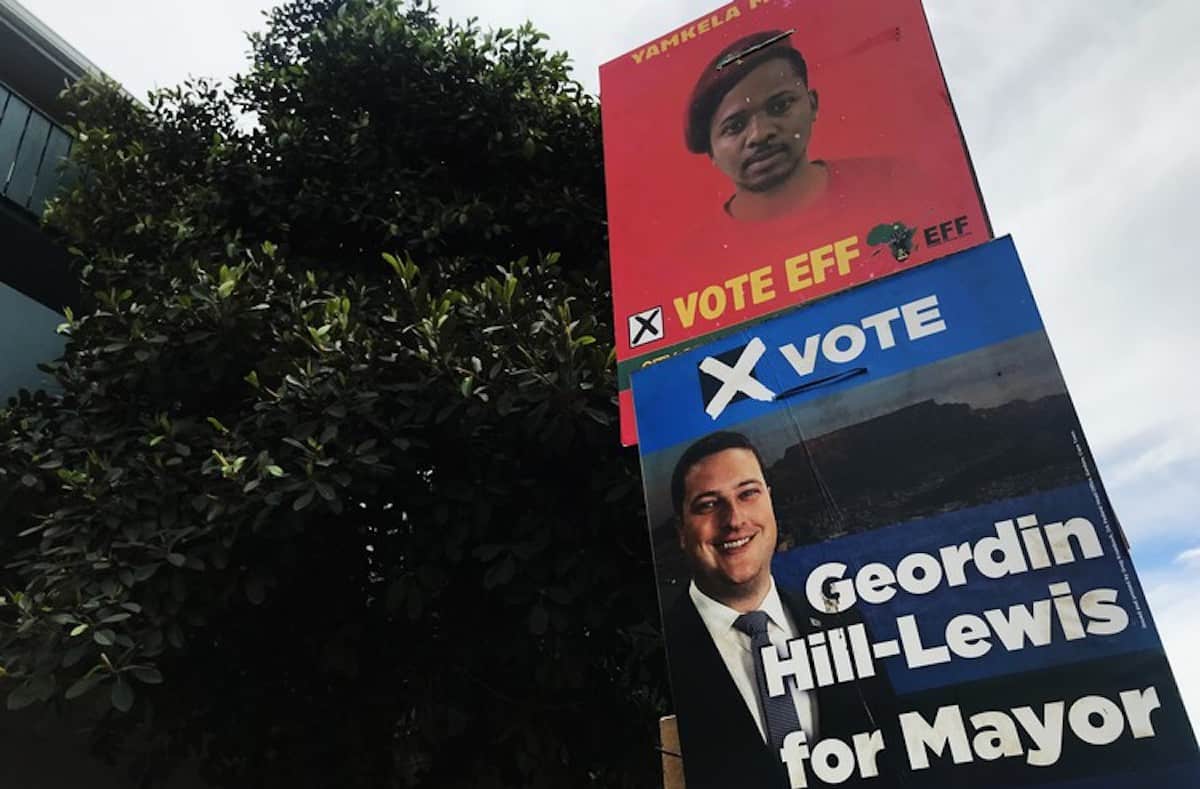 Montgomery Brewster, played by Richard Pryor in the 1985 movie Brewster’s Millions, runs for mayor of New York with the twist that he asks his supporters to vote for None of the Above.

None of the Above is arguably the winner of South Africa’s 2021 local election.

In all post-democracy municipal elections no more than about 40% of the adult population has voted. But even so, this has been the worst turnout yet, as the table below shows. Despite the population being 6 million greater this year than in 2011, 1.5 million fewer people voted.

There are many reasons why people stayed away or didn’t even register.

But disaffection with our political leaders, too many of whom have a deserved reputation for being corrupt, incompetent, indifferent, out-of-touch or all of the above, especially at local level, was likely a key factor. It’s a pity because an effective local government can tangibly improve living conditions.

The ANC has lost majority control of eThekwini. Now, of all of the major municipalities, only East London and Mangaung remain in the ANC’s control. And the latter only just: the ANC won 50.6% of the vote, down from 56.5% in 2016.

It will not get outright control in any of Gauteng’s nine municipalities, with the possible exception of Lesedi, where the outcome is not 100% clear at the time of writing.

It’s also completely out of the picture now in Cape Town and much of northern KwaZulu-Natal.

For the first time in a post-1994 election, fewer than 50% of voters have supported it. Nearly three million fewer people voted for the ANC in 2021 than in 2016.

In some places one had the feeling the ANC forgot it was election time and didn’t bother to run a campaign. The choice of Fikile Mbalula as head of elections was not a recipe for success.

Over the past decade the party has managed to make most state institutions dysfunctional. Jacob Zuma allowed corruption and incompetence in the party to flourish, and his (or his supporters’) attempt to destabilize the country in July probably contributed to the ANC’s loss of its majority in Ethekwini. The hope of renewal that Cyril Ramaphosa brought to the party in 2018 has almost evaporated. The prospect of revival in 2024 is dim.

GroundUp’s pre-election coverage highlighted the terrible state of some ANC-run municipalities. This was the outcome in them:

The DA’s membership should be looking hard at its leaders. 2019 was a difficult election for the DA because of the hope brought by Cyril Ramaphosa. The DA responded to its drop in support by undoing its work of the previous decade, parting ways with its relatively new black leadership.

With Mmusi Maimane, Lindiwe Mazibuko and Herman Mashaba gone, the party appeared to focus on regaining support lost to the Freedom Front Plus, but in so doing undid any prospect of gaining substantial support among black voters.

The Phoenix poster debacle didn’t help, though it did make gains in one Phoenix ward. It won ward 52 from the ANC, but its share of ward 49 declined, though it’s still the biggest party.

Party leader John Steenhuisen tried to put a happy face on things by pointing out that its proportion of votes has increased since the 2019 national election but the 2016 local election is surely the better comparator. In any case its absolute support has dropped considerably since 2019.

In its Western Cape stronghold, the DA lost the Cederberg in an intervening by-election. It had over 50% of the vote here in 2016 but has now split its vote with a party called Cederberg Eerste, and the ANC won a plurality. It has moved from second to third place in Kannaland behind the ANC and the obscure ICOSA. In Bitou (Plettenberg Bay) its support dropped from just under 50% to 40%.

The DA nearly won Gqeberha in 2016 with 47% of the vote. This has dropped to below 40%. It now has the same number of seats as the ANC – 48. It’s going to have a tough time forming an alliance that can hold the balance of power. The EFF holds eight seats, and nine smaller parties hold 15 seats between them.

The DA slightly increased its hold on Midvaal in Gauteng, but because of lower voter turnout it actually received fewer votes than in 2016.

On Twitter, Helen Zille’s combative style couldn’t have endeared her to voters. Contrast her style with Western Cape Premier Alan Winde, whose star has shone because of his handling of the Covid pandemic. He comes across as a warm person intent on getting the job done, not seeking squabbles over electoral non-issues. The DA needs more people like Winde and more black leaders.

Had the DA been patient after the 2019 election and kept its leadership intact, it may have done a lot better. Now the party truly has a leadership crisis. Are John Steenhuisen and Helen Zille really the right people to lead it into 2024?

Superficially it may appear that the EFF did well. Its share of the vote grew from 8.2% to 10.4%, and it has over 160 more seats. It will likely be the kingmaker in a bunch of hung municipalities.

But it failed to win a single municipality. And its absolute number of votes dropped from 2016. It must sting that it is not even the second-biggest party in any metropolitan municipality and is only the fourth-biggest party in Johannesburg, the country’s largest metro.

The VBS corruption scandal, coupled with its divisive rhetoric does not appeal to most voters, even those disillusioned with the ANC.

The IFP won several municipalities in KZN that were under ANC control, though it will have to form coalitions in several of these. It has also gained votes since 2016 but mostly benefited from lower ANC turnout. It remains relevant only in one province, albeit the country’s second-largest.

The IFP, usually restricted to rural areas, did well in two economic powerhouses, Richards Bay and Newcastle. It may be in a position to demand these mayoral chains in a coalition.

The DA’s strategy of trying to court Freedom Front voters didn’t seem to work well. The party has gained votes from 2016. It may be able to squeeze into coalitions in some hung municipalities. But it’s never going to be a big-hitting party, though it does now have a substantial presence in every province.

It came out in support of Cape independence, but it’s unclear if this had any role in its growth from 1% to 3% and the reality is the party remains minor in the Western Cape.

Herman Mashaba’s party didn’t campaign much outside of Gauteng but it has already got 2% of the electorate’s support nationally, and nearly 10% in Gauteng. It hasn’t won any ward seats but, with its proportional vote, it is well placed to take part in coalitions. It may indeed be a viable future contender for real power.

Mashaba has successfully projected an image of competence compared to the ANC because of the decline of services in Johannesburg following his mayorship. But his anti-immigrant views have no doubt been a factor in his popularity, and this is troubling for the future.

The rise of smaller parties brings challenges. They may have outsized negotiating power in hung municipalities.

Incredibly, despite Kannaland being placed under administration for four years, ICOSA remains the largest party in this area, holding three of the seven available seats.

Patricia de Lille’s GOOD Party only made an impact in the Western Cape with 4% of the vote. Countrywide it got less than 1% – a mere 150,000 votes or so. When GOOD’s predecessor, the Independent Democrats, stood in 2006, it got over 400,000 votes. Even Gayton McKenzie’s Patriotic Alliance did a bit better than GOOD, getting nearly 1% of the vote countrywide but fewer seats than GOOD in the Western Cape.

Anti-vaxxer parties barely registered. The ACDP slightly increased its vote count to about 180,000 from 120,000 but, at less than 1% of the electorate, it remains irrelevant.

The Cape Independence party, fresh off a “survey” that alleged that 800,000 people supported the movement that gives that party its name, won no seats and a mere 14,000 or so votes.

Related Topics:DemocracyLeadershipSouth Africa
Up Next

South African voters are disillusioned. But they haven’t found an alternative to the ANC