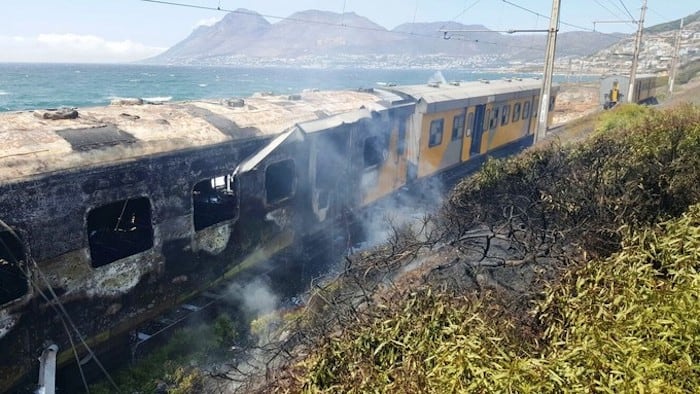 On a recent trip to rural Botswana, a local man on hearing that I was South African shook his head. “What is wrong with you people?” he asked. “Why do you burn everything? We have so little and we watch you burn what you are so lucky to have.”

Public buildings and municipal offices have been the focus of angry protesters, most recently  the historic City Hall of Bloemfontein was burnt down. Private vehicles and trucks, even school buses, that happen to be in the vicinity are regularly and capriciously targeted. The practice emerged during resistance to apartheid with the goal of making the country ungovernable.

Playwright Omphile Molusi wrote movingly about how the people of Itsoseng in the remote North West burned down their shopping mall with its library and cinema when he was just a toy-toying 14-year-old. A full-grown man, he sees how the town never recovered. Molusi poetically interpreted it as a kind of curse, a punishment for stupidity.

Firefighters attempt to put out the blaze. Photo: Ashraf Hendricks

That violent protests continue to target key infrastructure in the democratic era of South Africa suggests that many people still don’t feel they are being listened to, don’t believe they are getting a fair stake in the current dispensation, and act as if they have nothing to lose.

Since January 2017, no less than 28 coaches have been set alight by angry commuters in the Western Cape. Metrorail only has 58 trains sets. To adequately fulfil its current timetable, it requires 84 train sets. Coaches are being burnt faster than they can be replaced. Trains on the busiest commuter line, Khayelitsha-Mitchells Plain, have been cut from the 14 carriages required to just eight in some cases. To complicate things, Metrorail has three different models of train in operation with carriages and engines that cannot be interchanged.

The Vodacom shop on the station was ransacked. So was an MTN shop. Photo: Ashraf Hendricks

In a previous article, I looked at the “rational” strategy behind burning down schools. But there seems to be no such logic to torching the few ailing commuter trains that remain in Cape Town.

Metrorail blames a criminal element; some people point the finger at taxi operators; others say it is the work of anarchical youths. But watching protesters once the fire has started, it becomes clear frustrations with Metrorail have been building up day upon day for years.

Metrorail has a very long, well-recited litany for why its service to commuters is so appallingly bad – from an ageing fleet well beyond its designed lifespan to cable theft and vandalism.

The spatial legacy of apartheid means that the working poor from Cape Town’s distant townships are heavily dependent on trains to get to and from work. It is also primary transport for many school children and students. The number of commuters has also grown. The daily grind they face is disheartening.

Cape Town’s trains are hard to love. The carriages are dirty, decrepit and bursting at the seams. People hang on wherever they can get a foothold. Security is mostly absent and people are regularly preyed upon by criminals. Delays of 20 to 40 minutes have become routine. Often trains stop between stations leaving commuters trapped on board. Provision of alternatives, such as buses, when services are cancelled is a rarity. Excuses, even if true, become aggravating through tedious repetition.

If one is looking for broad-based black economic empowerment, government could hardly do better than to provide affordable, daily transport. But disinvestment in rail has been a major countrywide failing of the post-apartheid government. Even worse, the renewed interest in investing in the rail infrastructure by the Passenger Rail Agency of South Africa (PRASA) has been mired in some of the worst corruption the country has seen, with unqualified, incompetent political appointees at the top looting the company.

Read: ‘Julius vs The ANC’

Meanwhile, the single biggest problem on the ground is a hopeless lack of communication. Trains have no intercom system; electronic display boards are coupled to a train scheduling system and cannot immediately reflect timetable changes; the platform announcements are all but inaudible. Train users with smartphones can check Twitter, use the Gometro app, or register to receive SMSes. But the truth is usually Metrorail simply doesn’t know how long a problem will take to fix on its near obsolete infrastructure or what the knock-on effects will be for its schedule. For the most part, customers must simply grin and bear it.

Two weeks ago, after workers and school children had been stranded for hours on end without alternative transport to get home and little information about what was happening, a train was torched inside the station.

The trains are hardly worthy of respect, but seen as just another insult added to the drudgery of daily life. This is what is dished up to commuters who spend hours every day of their lives on trains hardly better than under apartheid, while they hear through the unions about PRASA’s R13.9-billion in irregular expenditure and rampant corruption at the top.

The conditions of the trains, the careless way they are managed, and the pathetic service they provide, are an intolerable humiliation for many people who already feel disrespected. Add to this that some lose precious working hours, shrinking meagre incomes and arrive at work to hear unsympathetic employers make wise cracks about “African time”.  In some cases, people have been robbed of their livelihoods by Metrorail when they have lost their jobs for being repeatedly late. Local businesses do not come off unharmed either when the workforce of a factory arrives hours late.

Torching trains only makes the service worse of course. If there can be any logic to burning trains it is perhaps to force a solution, a tabula rasa after years of worsening service when the ineffectual management of PRASA seems devoid of solutions and talks about a turn-around in 17 years time. An emergency plan urgently needs to be put together.

“After getting pregnant, you are done!” says President John Magufuli

Release of Leader Re-Awakens Calls for Biafran Secession in Nigeria