To win the election, Raila Odinga has to conquer the mountain 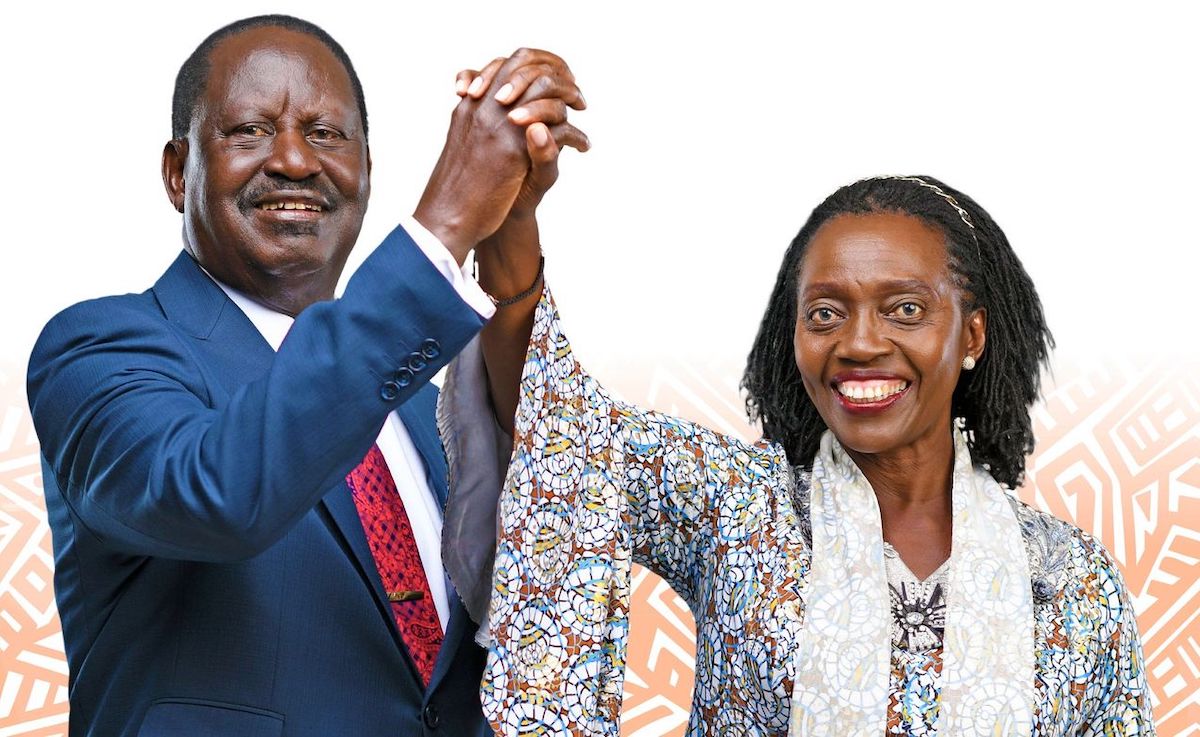 To win tomorrow’s presidential elections, Raila Odinga, Azimio coalition’s flagbearer, has to garner over and above 50% of the total registered GEMA nation votes. The GEMA vote is 6.2m and the turnout is estimated will be between 70–75%. Therefore, Raila has to at least get 2.25m mountain votes, if the turnout is 75% and if he has to have a fighting chance. That is the only way he will fend off Ruto’s onslaught, by getting half of all the GEMA votes cast, irrespective of its turnout.

It is a herculean task, considering that he’s been unable to climb beyond the mountain slopes: I am using the term mountain liberally, to mean the GEMA vote countrywide. He hasn’t conquered the mountain, not just for this general election, but for all the four times he has ran for presidency – 1997, 2007, 2013 and 2017. This means he has a history of a record of failure among the largest cache of votes in the country. He has, more or less, always averaged 7% of the mountain vote.

Odinga has always averaged 7% of the mountain vote

Two questions: Can he, this time round, overturn that record? If he did, what would be the major cause of turn of events? In other words, what would have caused the paradigm shift?

Martha Karua’s selection as Raila’s running mate was supposed to jump-start his faltering entry to the mountaintop. To Azimio’s great frustrations, it has been stuck at the mountain base, no difference at all than when Raila didn’t have her by his side. Karua’s selection was good because it wasn’t bad. Still, she didn’t excite and therefore pull the critical woman vote to Raila’s camp.

This is what Nyeri town MP, Ngunjiri Wambugu, a diehard Azimio loyalist on August 3, 2022, five days to the general election, wrote on his Twitter handle: Deputy President @William Ruto’s reception in Nyeri town tells us how my Azimio family will get it hard to get even 10% from Mt Kenya. Truly Ruto have (sic) been doing so well to win millions of votes in Mt Kenya unlike my friend Raila Odinga. Tuambiane ukweli tu, let us tell each other the truth.”

On August 6, on his Twitter handle again: “My projection remains that @WilliamsRuto still stands a better chance (sic) win this election. Away from political divides, Kenya Kwanza team seems to be more organised than our Azimio la Umoja family. Raila Odinga and my boss should do something to strengthen us before 9/8/22.”

President Uhuru had hoped that as he planned his exit, he would, easily and successfully transfer the GEMA vote to Raila. Apparently, it has been a costly and terrible gamble: The GEMA nation has shunned President Uhuru’s advances and his political barter schemes.

So, coupled with the fact that electorally, GEMA has always snubbed Raila and its current recalcitrant stance towards Uhuru, Raila boxed himself into a difficult corner: The friend of my enemy is my enemy. Had Raila not found himself caught up in the internal quarrel between Uhuru and the GEMA nation, would it have been kinder to him this time round?

As Raila was expending his energies trying to navigate the nooks and crannies of the mountain, Ruto was busy raiding his erstwhile strongholds – Coast (Mijikenda), lower eastern (Kamba), Kisii and Western (Luhya) regions. The total basket vote of these regions amounts to 7.5 million: Luhya 2.9m, Kamba 2.3m, Kisii 1.3m and Mijikenda 1m votes. The Maa and Turkana people and the north-eastern region total votes are roughly 3.3m. That’s 10.8 votes in total.

In short, Kenya Kwanza, has turned these regions into swing votes. The recent lamentation by Raila about Bungoma county “abandoning” him, was an agonising revelation that indeed he had lost some of his Luhya support base to Ruto, which it seems, he had always taken for granted.

“An opinion carried out last week shows Raila is trailing Ruto in Bugoma,” mourned the Azimio presidential candidate, two weeks to the election. “He (Ruto) is nearly at 60% and I am at 40%. Shame on you people. Shame on you people. I feel slighted. . .I thought Bukusus are made of different material.”

The Bukusu people, the largest of the 17 Luhya dialects, mostly live in Bungoma county. In 2017, Raila got 85% of the total Luhya vote. It is hardly that he will surpass 60% this time round.

Failure to conquer the mountain, Raila, who has 2.4m Luo votes intact, will need to collect, on the very least, between 65–70% of the 10.8m votes that in 2017 were undoubtedly his bastion and that Ruto now has turned into swing areas. The Luo people are expected, this time round, to register one of their highest turnouts of about 80–85%. The stakes couldn’t be higher.

The Luo people are expected, this time round, to register one of their highest turnouts of about 80–85%. The stakes couldn’t be higher

In 2007, 2013 and 2017, Raila got 80% of the lower eastern region’s votes, but now, the area which mainly comprises the Kamba people, has been turned into a contested terrain. This is so, because of the recent conduct of one, Kalonzo Musyoka. His publicised seduction antics and eerie dalliance with Azimio coalition, resulting in his pendulum like behaviour – now you have me, now you don’t – wore out the Kamba voters.

That’s why Azimio mandarins, despite all their loathing of the uncanny politician, couldn’t resist the urge to woe and trick him into declaring support for Raila, three weeks to the election date. But the mission backfired when Supreme Court of Kenya (SCOK) declared he remains impeached and cannot vie for any seat, even after Independent Electoral and Boundaries Commission (IEBC) had apparently cleared him to run for Mombasa governor seat.

That mess saw Sonko defect to Kenya Kwanza coalition and with that defection, he not only will he alter the Kamba vote, but also any other vote that he commands. At best, therefore, Raila may garner about 65% of the total Kamba vote, which is 1.5m.

At the coast region, where Sonko’s support is significant and whose allegiance, together with that of MP Aisha Jumwa, former Mombasa senator Hassan Omar and Kwale governor Salim Mvurya, all former Raila’s lieutenants has shifted to Ruto, will cut Azimio’s support base to 60%. In 2017, Raila had 80% of the total coastal vote.

Sonko’s factor will also be felt in Nairobi county, where he was governor for three years, until December 2020. Elected with the largest margin of votes of any governor, Sonko still retains that support base. Nairobi, then just like the Kamba vote, becomes a contested terrain for Raila. Bottomline, Raila will be forced to share Nairobi county’s votes 50–50 with Ruto’s Kenya Kwanza.

With his 2.6m Kalenjin vote intact, and the 80% GEMA vote, ostensibly tucked in his corner, Ruto begins as the hot favourite to win the presidential race

In August 8, 2017 elections, Raila officially lost by 1.4 million votes. It is estimated that he has lost equal number of that vote, after chunks of those votes from his bastion have been chipped off by Ruto. Hence, Raila will require about 2.8m votes to plug that hole. So, the big question is this – after losing ground in his strongholds, where is his path to victory?

Alternatively, having conquered the mountain, Ruto must nonetheless strive to get over and above 80% of the GEMA vote, of 75% turnout. That translates to roughly 3.6m votes. With his 2.6m Kalenjin vote intact, and the 80% GEMA vote, ostensibly tucked in his corner, the Kenya Kwanza presidential candidate begins as the hot favourite to win the presidential race. Just like the Luo nation, the Kalenjin nation will mobilise all its resources to ensure they register one of their largest voter turnouts in recent elections.

To comfortably stay in the lead, Ruto will therefore, on the very least, have to garner more than 35% of the 10.8m votes. Overall, what Ruto has done is that he has generally eaten 40% of Raila’s pie that he erstwhile controlled, while zoning off his stronghold and embarking on a successful charm offensive of President Uhuru Kenyatta’s backyard.

Yet, ultimately, and all said and done, it’s the camp that will mobilise the largest number of its base to come out and vote for its preferred presidential candidate that will carry the day.

Reasons to hope electoral debates are here to stay

The US is revisiting its trade relations with African countries: key issues on the table