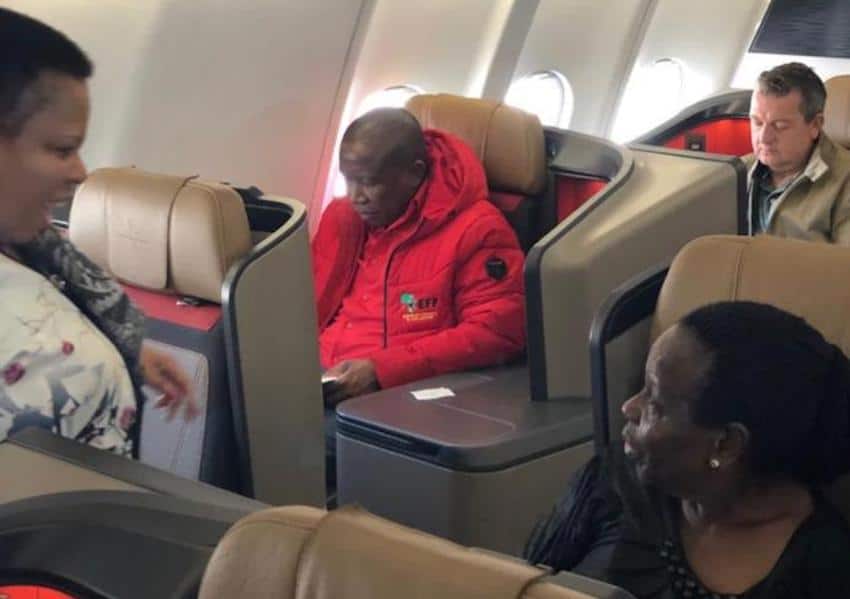 There have always been strong questions surrounding how politicians afford lavish lifestyles, particularly when they happen to live in one of the most unequal societies in the world. Leaders of South African opposition party,  the Economic Freedom Fighter (EFF) have been constantly on the spotlight, accused of amassing wealth, and leading contradictory flashy lifestyles while pretending to fight for the poor.

The EFF members’ display of material wealth and appreciation of the finer things in life has been well documented, and in some cases controversially so.  This year, members of the party were heavily criticised for staying in expensive Camps Bay accommodation and drinking expensive champagne in Cape Town while attending the State of the nation address.

Recently, Julius Malema the leader of the EFF was pictured sitting in the luxury of business class during a domestic flight, donning a red jacket, official colours of the party, one of its salient features. Malema was also accused of drinking Moet, an expensive brand of champagne, although there was no champagne glass in sight in the picture posted on Twitter. Daniël Eloff posted the picture captioned; “Enjoying some Moët et Chandon flying in business class while preparing to fight for the poor”.

While the Twitter message was meant to show and expose Malema’s double standards by flying in business class, the post was read differently by numerous users who came out in defence of the  EFF leader. Many argued that to fight for the poor or to care about economic and social equality doesn’t mean one has to be poor or forego various material benefits. Many other users who defended Malema saw the post a racist, arguing that Black people had the right to travel in comfort and dignity, saying business class travel should not be seen as the preserve of White people.

Here are some of the posts defending Malema.