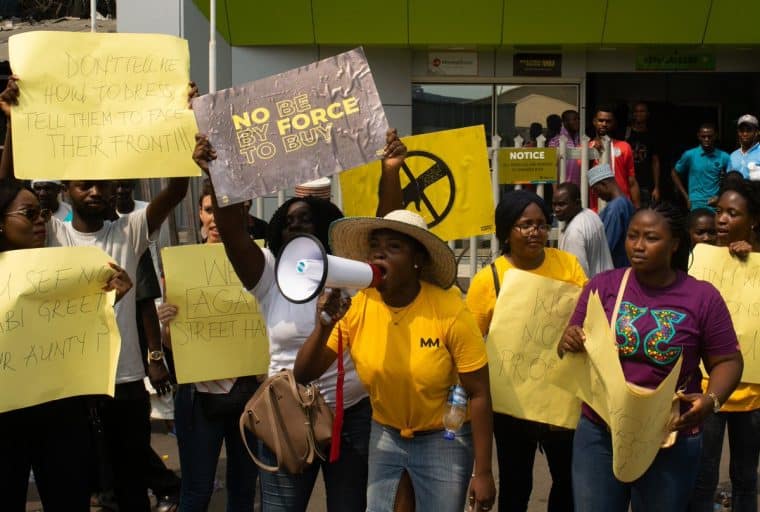 On the morning of 30th June, a Sunday, the streets of Lagos and Abuja experienced a different form of protest one wouldn’t have imagined. Nigerians dressed in white t-shirts protested in front of the Commonwealth of Zion Assembly (COZA) church. Biodun Fatoyinbo, the Senior Pastor was accused of rape by Busola Dakolo. The video of Busola’s story was posted by YNaija on June 28th and led to a huge social media uproar with hashtag #StepDownPastor.

Fatoyinbo, a flamboyant young pastor who appeals largely to the youths had earlier been accused on rape in 2013. A case that was swept under the rug. This new accusation however, coming from the wife of one of Nigeria’s beloved and respected musicians, Timi Dakolo, couldn’t easily be dismissed.

Rape in Nigeria as is the case in many other parts of the continent flourishes on victim blaming, not just from family members, but from the society and even the police. In many case, women are never believed. In what has been the #MeToo movement breaking the silence in the church, Busola’s story led to many Nigerian women on social media to talk about their experiences. While some challenged their rapists on social media, some talked about how their relatives reacted to their stories of rape. It was a moment of realization of how Nigerian women have been mistreated and endured sexual harassment by men.

I sat down for an interview with one of the bravest woman I have met – #BusolaDakolo.

Rape is a thief of the soul, a blight on the spirit, and a darkener of the heart. An (alleged) rape in the name of God? That one crushes, beyond anything else. https://t.co/SW1b18ZXuh pic.twitter.com/Mk3uvY2vGA

Many of the protesters, held placards condemning the silence of the church. Some placards had inscriptions challenging the infallibility of pastors who have a god status in Nigeria. The protests led to Biodun stepping down as the Senior Pastor of COZA. The issue of rape unfortunately is one the Nigerian church has failed to address adequately. For a religious country that has the largest church buildings on the continent, and one of the highest rates of rape, and least rape convictions, the Nigerian church has failed to adequately address this societal issue.

Read: Sexual harassment in schools – the urgency need for a revolutionised sex education

Unfortunately, the stronghold of religion took over again when the General Overseer of the Redeemed Christian Church of God, Pastor Enoch Adeboye made a comment many agreed with but was a distraction to the fight at hand. Pastor Adeboye said, “I’ll never have a private secretary who’s a woman. When a woman accuses you of something, nobody will listen to you whether you’re right or wrong; be wise.”

In a society already beset with sexism and employment imbalance, mostly against women, not only did Pastor Adeboye fail to address the issue of rape squarely, through his statement he has further given excuses for more women to be discriminated when it comes to employment. Sexual harassment, rape and religion in Nigeria are unfortunately very strong pillars the society has failed to hold accountable.

Busola has filed a petition against Fatoyinbo with the Assistant Inspector General of Police, Lagos. According to the AIG, he told YNaija, “The case is here with us in Lagos. Some of the Ogas here say the Biodun man has found out and is trying to move the case to Abuja, but that is not possible because the lady in question is resident here and she filed here. Investigation is ongoing, and I am telling you, what we are finding is bigger than what the mouth can say.”

Nigerian women have been victims in their own country for a while. Busola Dakolo’s story has empowered many young women to tell their stories and stand up for their rights.