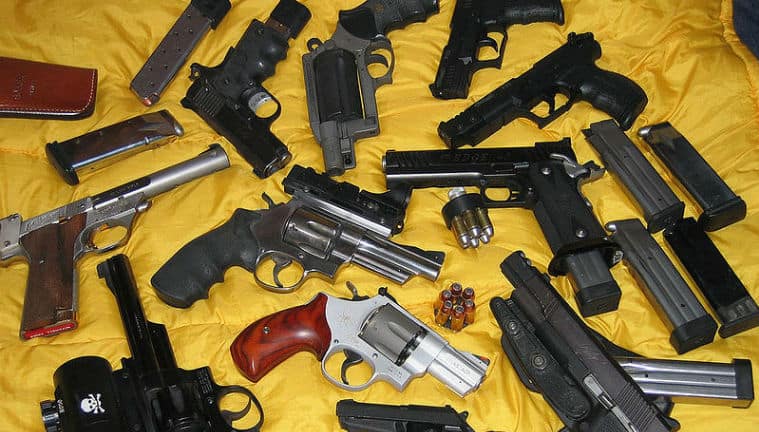 Hlupha was eight when he got his first gun and his neighbour taught him to commit crime. His first robbery was of the post office in the small town where he lived. When Hlupha was 16, he shot a boy at school for flirting with his girlfriend. He committed many more crimes over a number of years until he was arrested and convicted for kidnapping, robbery and assault. When we met him he was in prison.

Velabahleke was 10 when he stole his first gun. He found his second gun two years later during political protests. During an interview, Velabahleke told us how his father had beaten his mother and how he, too, had been beaten by his father and teachers. His life was filled with violence.

He said his gun had changed his life and brought him status among other young men. When he had a gun he no longer had to rely on his (exceptional) entrepreneurial skills to earn a living, as he could do much better from robbery. The gun made him feel safer, but ironically also increased the danger he faced.

These are just two of the stories we heard while speaking to men serving sentences for violent crime. Owning a gun was significant for these men. It changed their behaviour and escalated their crimes. The earlier they got a gun, the earlier they committed serious acts of violence.

Having a gun was not the start nor the cause of their criminal careers, but it did affect the nature and severity of their crimes. It was as if by owning a gun, they crossed an invisible boundary between normal society and the criminal circles they moved in.

Gun ownership let them rob more often and more effectively. Many of the guns used by Hlupha and Velabahleke had at some point been licensed and legally owned, but were stolen and used to commit violent crimes.

Following the passing of the Firearm Control Act in 2000, the proportion of firearm-related homicides has decreased substantially in 2011. Yet there were still just over three million firearms in the hands of 1.8 million licensed gun owners in South Africa, according to the Central Firearms Registry – and we don’t know how many illegal, unlicensed firearms are in circulation. Handguns are light, easy to conceal, and require little expertise to shoot. This makes them the weapon of choice for criminals and those who wish to protect themselves and their families. If we are to reduce the risk of firearm-related deaths, we need to act to reduce the availability of guns.

One of the most effective ways to get rid of illegal guns is to hold another firearms amnesty. The last amnesty in 2005, in support of stricter gun laws, saw 100 066 firearms and their components handed in along with almost two million rounds of ammunition.

Most firearms are owned by men, and most victims of firearm homicide are men. In 2009, the last year for which data is available, 89% of the 6 428 people shot and killed were men. The majority of deaths were of men between the ages of 25 and 29, but they started as young as 15.

Through the National Injury Mortality Surveillance System (NIMSS), scientists are able to examine gun-related deaths over a decade. NIMSS is a national mortuary-based system that captures information regarding the ‘who, what, when, where, and how’ of non-natural deaths, including those from guns.

In 2009, the NIMSS data showed there had been an almost 50% reduction in gun deaths since the introduction of the Firearms Control Act passed by Parliament in 2000. This shows that making it harder to own a gun, reducing the number of guns in circulation and strengthening national gun laws can result in fewer guns, and that translates into less gun violence.

Australia, Brazil and Colombia found the same thing. There is also evidence that strong gun laws reduce other violent crimes, such as attempted murder and assault. Simply put, the presence of firearms greatly increases the risk of violent crime.

If men like Velabahleke and Hlupha are to be prevented from committing violent crime, we have to stop them from seeking firearms in the first place. That is going to require a shift from harmful gender norms that value men as tough and violent, and also requires a greater effort to address family dysfunction and violence in schools. But unless there is also greater control over firearms and a reduction in the number that are available to be stolen by men such as Hlupha and Velabahleke, we won’t see a dramatic reduction in firearm-related deaths.

Limiting access to firearms can be achieved in three ways. First, through controlling the legal stocks of guns, and limiting the number and type of firearm any one person can own. Second, illegal guns must be taken out of circulation through police operations and firearms amnesties. Lastly, the flow of legal guns into criminal hands should be stopped by reducing corruption and fraud in the firearms control management system.

Strengthening gun laws and restricting access to firearms, including legal firearms, is an important step towards reducing violence in our society.

This article was first published by The Institute for Security Studies and is republished here with their permission.

Related Topics:Crime South Africa
Up Next